Raymond Williams made a central contribution to the intellectual culture of the Left in the English-speaking world. He was also one of the key figures in the foundation of cultural studies in Britain, which turned critical skills honed on textual analysis to the examination of structures and forms of resistance apparent in everyday life. Politics and Letters is a volume of interviews with Williams, conducted by New Left Review, designed to bring into clear focus the major theoretical and political issues posed by his work. Introduced by writer Geoff Dyer, Politics and Letters ranges across Williams’s biographical development, the evolution of his cultural theory and literary criticism, his work on dramatic forms and his fiction, and an exploration of British and international politics.

Jenny Davidson teaches in the Department of English and Comparative Literature at Columbia University. She has published two books on eighteenth-century British literature, including Breeding: A Partial History of the Eighteenth Century, and four novels. Her latest book, Reading Style: A Life in Sentences, was published by Columbia University Press.

Geoff Dyer is the author of a number of novels and works of nonfiction, including Another Great Day at Sea; The Ongoing Moment; Jeff in Venice, Death in Varanasi; and The Missing of the Somme.

Nikil Saval is the author of Cubed: A Secret History of the Workplace, and an editor at n+1. He lives in Philadelphia.

Raymond Williams
“A toughly analytic mind is fueled by the rich emotional resources of a creative writer.”—Terry Eagleton
Geoff Dyer 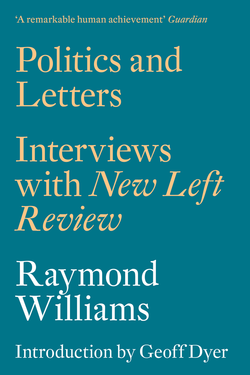