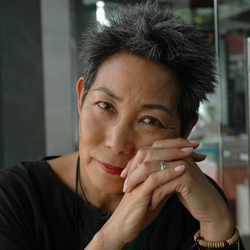 The Asian/Pacific/American Institute at NYU is hosting an intergenerational program on movement-building, activism, and interracial solidarity to consider how we might look to the past to strategize in our current moment.

A book signing and conversation with the audience will follow remarks from each guest.

Copies of Karen Ishizuka's Serve the People will be sold by the NYU bookstore at a 20% discount, at the event.

Karen Ishizuka‘s Serve the People: Making Asian America in the Long Sixties (Verso, 2016) draws on interviews with organizers and activists, agitators and artists of the Asian American movement to tell the story of the 1960s and 1970s, and the anti-imperalist, anti-racist, feminist, democratic demands of the time. As Jeff Chang explains, “There was a time, Karen Ishizuka reminds us, when the word ‘Asian American’ was not merely a demographic category, but a fight you were picking with the world.”

Akemi Kochiyama shares lessons she has learned about cross-racial organizing and solidarity in the movements of which she has been a part of, and those from the life and legacy of her grandmother Yuri Kochiyama, who was a dedicated member of Black liberation struggles, the anti-war movement, and the Asian American movement.