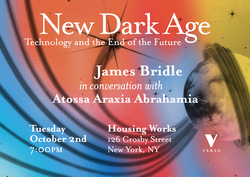 James Bridle and Atossa Araxia Abrahamian explore the dark clouds that gather over our dreams of the digital sublime. As the world around us increases in technological complexity, our understanding of it diminishes. Underlying this trend is a single idea: the belief that our existence is understandable through computation, and more data is enough to help us build a better world. In actual fact, we are lost in a sea of information: despite its accessibility, we’re living in a new Dark Age.

What is needed is not new technology, but new metaphors: a metalanguage for describing the world that complex systems have wrought. We don’t and cannot understand everything, but we are capable of thinking it. Technology can help us in this thinking: computers are not here to give us answers, but are tools for asking questions. Understanding a technology deeply and systemically allows us to remake metaphors in the service of other ways of thinking – without claiming, or even seeking to fully understand – and to ask the right questions to guide us through this new dark age.

“[James Bridle is] an Orwell of the computer age.”
– Kirkus Review

“[New Dark Age] is a doomy overture to a new era. A work of digital gothic in which the chills are provided by the unpredictable and unstoppable forces we’ve unleashed on the world in the decades since the Manhattan Project.” – Vice

“James Bridle is a master of finding contradictions within existing technologies...New Dark Age is an important text for the present moment.” – The Quietus

James Bridle is a literary editor, technologist, writer, journalist, and visual artist. He writes for Guardian, Observer, Wired, Frieze, Atlantic, and many other publications.

Atossa Araxia Abrahamian is a journalist based in Brooklyn. Her writing has appeared in The New York Times, New York Magazine, the London Review of Books, and other publications. She has worked as an opinion editor at Al Jazeera America and a general news and business reporter for Reuters. Atossa grew up in Geneva, Switzerland, and studied philosophy as an undergraduate at Columbia University, where she returned for a master's program in investigative reporting at the Graduate School of Journalism.