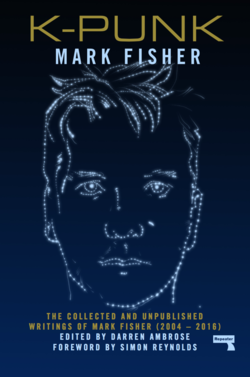 When Mark Fisher committed suicide in 2017 at the age of 48, we lost one of the 21stcentury’s greatest cultural theorists. An icon for today’s insurgent “alt-left”, from 2003 to 2016 Fisher wrote dazzling analyses of our strange and terrifying world—neo-liberalism, the loneliness and distracted boredom of digital life, and how these realities are reflected in music, film, TV, and literature. He also developed a vision of a different future – based on community, democratic control of the economy, creative freedom for all, and harnessing technology for the good of humanity.

K-Punk collects Fisher’s most incendiary and influential posts from his seminal blog “k-punk”, as well as a selection of his brilliantly insightful film, television and music reviews, together with his extraordinary writings on politics, activism, mental health, and popular modernism for numerous websites and magazines. Also included are two previously unpublished essays, the unfinished introduction to his planned book on “Acid Communism”, and an analysis of the 2016 US Presidential election, written shortly after Trump’s victory.

Join us for an evening of celebration and discussion of Fisher’s work with the novelist Hari Kunzru, co-host of Chapo Trap House Amber A’Lee Frost, writer Sukhdev Sandhu, and musician Meredith Graves.

“The best cultural studies writer of his generation.”

"[K-Punk] was lucid and revelatory, taking literature, music and cinema we're familiar with and effortlessly disclosing its inner secrets."

“Mark Fisher’s K-Punk blogs were required reading for a generation.”