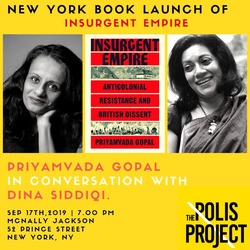 Join Priyamvada Gopal and Dina Siddiqi in conversation around Priya's new book on how rebellious colonies changed attitudes to empire.

Insurgent Empire shows how Britain’s enslaved and colonial subjects were active agents in their own liberation. What is more, they shaped British ideas of freedom and emancipation back in the United Kingdom. Gopal examines a century of dissent on the question of empire and shows how British critics of empire were influenced by rebellions and resistance in the colonies, from the West Indies and East Africa to Egypt and India. In addition, a pivotal role in fomenting resistance was played by anticolonial campaigners based in London, right at the heart of empire.

Priyamvada Gopal is University Reader in Anglophone and Related Literatures in the Faculty of English and Fellow, Churchill College, University of Cambridge. She is the author of Literary Radicalism in India: Gender, Nation and the Transition to Independence and The Indian English Novel: Nation, History and Narration.

Dina Siddiqi is a professor at NYU and BRAC University. Her research and publications cover a range of issues grounded in the study of gender and Islam in Bangladesh: transnational feminist politics, women’s work in the ready-made garment industry, the anthropology of human rights, gender justice, and non-state dispute resolution mechanisms. She is a Fellow at the Center for the Study of Social Difference (CSSD), Columbia University. She serves on the editorial board of Routledge’s Women in Asia Publication Series, she is Chair of the South Asia Council (SAC) of the Association of Asian Studies (AAS), and is on the board of the AAS.

"Priyamvada Gopal is an astonishing writer and thinker, one who is fearless in how she uses history to explain where we are now." – Nikesh Shukla, editor of The Good Immigrant