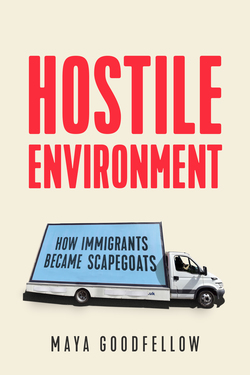 The UK government proudly calls the aim of its immigration policy to be the creation of a “hostile environment, ” while refugees drown in the Mediterranean and Britain votes to leave the EU against claims that “swarms” of migrants are entering Britain. Meanwhile, study after study confirms that immigration is not damaging the UK’s economy, nor putting a strain on public services, but immigration is blamed for all of Britain’s ills. Yet concerns about immigration are deemed “legitimate” across the political spectrum, with few exceptions. How did we get here?

Maya Goodfellow is a writer, researcher and academic. She has written for the New York Times, Guardian, the New Statesman, Al Jazeera, Independent, Labour List and Media Diversified. She is completing a PhD at SOAS, University of London.

Author of Pitch Black: The Story of Black British Footballers, Emy Onuora has an MA in Ethnic Studies and Race Relations from the University of Liverpool and has lectured extensively on the issues of Race and Sport within higher education. Co-Author of Great War To Race Riots alongside Writing on the Wall Co-Director Madeline Heneghan, which archives the plight of the black seamen, labourers and ex-servicemen left destitute in Liverpool after the Great War and how increased tensions and recessions boiled over into the 1919 race riots in seaports across Britain.

This event is programmed in partnership with Verso Books and Writing on the Wall.