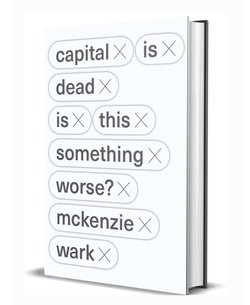 Join McKenzie Wark in conversation with Natasha Lennard around the launch of Capital Is Dead: Is This Something Worse?

In her new book McKenzie Wark argues that the all-pervasive presence of data in our networked society has given rise to a new mode of production, one not ruled over by capitalists and their factories but by those who own and control the flows of information.

Wark takes us on a tour of our information age. Drawing on the writings of the Situationists and a range of contemporary theorists, the book explores a vast panorama of the contemporary condition and the classes that control it. Capital is Dead offers the theoretical tools to analyze this new world of information, as well as ideas to change it.

McKenzie Wark is the author of Molecular Red: Theory for the Anthropocene, General Intellects: Twenty-One Thinkers for the Twenty First Century, A Hacker Manifesto, Gamer Theory, 50 Years of Recuperation of the Situationist International and The Beach Beneath the Street, among other books. She teaches at the New School for Social Research and Eugene Lang College in New York City.

Natasha Lennard is a Contributing Writer for the Intercept, and her work has appeared regularly in the New York Times, Nation, Esquire, Vice, Salon, and the New Inquiry, among others. She teaches Critical Journalism at the New School for Social Research and is the author of Being Numerous: Essays on Non-Fascist Life and coauthor of Violence: Humans in Dark Times with Brad Evans.