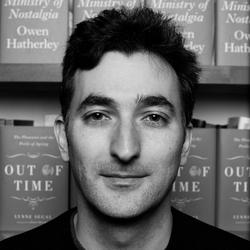 Join us for a reading with Tony Wood from his new book, Russia Without Putin: Money, Power and the Myths of the New Cold War.

In this provocative analysis, Tony Wood argues that the overwhelming focus on Vladimir Putin in most coverage of Russia today means we understand it less than we ever did before. Hailed as “excellent” (The Guardian), “searching” (New Yorker), “vital” (Bookforum), and “indispensable” (Los Angeles Review of Books), the book offers a well-informed alternative to the mainstream media’s picture of Russia, overturning standard assumptions about Putin and the system he rules. Additionally, it also looks ahead to what the future might hold both for the Putin regime and for Russia as a whole.

Tony Wood lives in New York and writes on Russia and Latin America. A member of the editorial board of New Left Review, he is previously the author of Chechnya: The Case for Independence (2007). His writing has appeared in the London Review of Books, the Guardian, n+1, The Nation, Jacobin, NYR Daily, Le Monde diplomatique, and Bookforum, among other outlets. His media appearances include interviews for BBC News, CNN, Real News Network, Telesur, Novara Media, KPFA’s Against the Current, and KPFK’s Beneath the Surface.