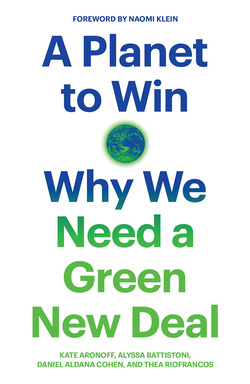 Thea Riofrancos and Daniel Aldana Cohen in conversation on their new book, A Planet to Win: Why We need a Green New Deal.

What could a radical Green New Deal look like, and how can we connect the politics of a Green New Deal with the fight for economic and racial justice?

The discussion will be followed by an opportunity for audience members to ask questions. Books will be available for purchase and signing. DC activists will provide information on how to join local energy democracy campaigns (nopepco.com) and the spring climate strikes (shutdowndc.org).

Everyone is welcome and the event is free and open to the public. The front entrance to the Festival Center is ADA accessible. If there is anything that you need to be able to fully participate in this meeting (for example, ASL interpretation, translation or childcare) please email ecosocialism(at)mdcdsa.org.

A Planet to Win: Why We Need a Green New Deal explores the political potential and concrete first steps of a Green New Deal. It calls for dismantling the fossil fuel industry, building beautiful landscapes of renewable energy, and guaranteeing climate-friendly work, no-carbon housing, and free public transit. And it shows how a Green New Deal in the United States can strengthen climate justice movements worldwide.

The age of climate gradualism is over, as unprecedented disasters are exacerbated by inequalities of race and class. We need profound, radical change. A Green New Deal can tackle the climate emergency and rampant inequality at the same time. Cutting carbon emissions while winning immediate gains for the many is the only way to build a movement strong enough to defeat big oil, big business, and the super-rich—starting right now.

Thea Riofrancos is an assistant professor of political science at Providence College and the author of Resource Radicalisms, forthcoming from Duke University Press. Her writing has appeared in The Guardian, n+1, Jacobin, The Los Angeles Review of Books, Dissent, and In These Times, among other outlets. She has been interviewed on the The Dig and Behind The News, and numerous other podcasts and radio programs. She also serves on the Steering Committee of DSA's Ecosocialist Working Group.

Daniel Aldana Cohen is an assistant professor of sociology at the University of Pennsylvania, where he directs the Socio-Spatial Climate Collaborative, or (SC)2. His writing has appeared in The Guardian, Nature, The Nation, Jacobin, Public Books, the Verso blog, and Dissent among other outlets. He has been interviewed on The Dig and Behind the News, and numerous other podcasts and radio programs.

This event is sponsored by the Metro DC DSA ecosocialist caucus.