Join us online for the launch of a new book Reactionary Democracy: How racism and the populist far right became mainstream, featuring the book's co-authors Dr Aurelien Mondon and Dr Aaron Winter; co-hosts of the Surviving Society podcast, Chantelle Lewis and Tissot Regis; and chaired by Dr Fran Amery.

Democracy is not necessarily progressive, and will only be if we make it so. What Mondon and Winter call “reactionary democracy” is the use of the concept of democracy and its associated understanding of the power to the people for reactionary ends.

Mapping the construction and evolution of racism in the US, UK and France, Mondon and Winter explore the ways in which the far right has engaged in a process of reconstruction and how it has impacted on and entered the mainstream.

Debunking common myths around the popular appeal and support of far-right politics, they demonstrate that its mainstreaming has in fact more to do with a top down process. They argue instead that attention must be paid to the way that elite discourse in the media, politics and academia has shaped the agenda to distract from systemic failure and inequalities. This is notably witnessed in what they call a populist hype, but also the hijacking of potentially progressive liberal tropes such as free speech all in the name of a reactionary democracy.

As Mondon and Winter conclude, there is an urgent need to counter these dangerous trends and this requires that democracy is anti-racist, as it must be anti-sexist and anti-classist, and against any and every form of oppression and where they intersect.

A 50% discount of the book will be available at this event.

Aurelien Mondon is a Senior Lecturer in Politics at the University of Bath. His research focuses predominantly on the impact of racism and populism on liberal democracies and the mainstreaming of far-right politics through elite discourse. His first book, The Mainstreaming of the Extreme Right in France and Australia: A Populist Hegemony?, was published in 2013 and he recently co-edited After Charlie Hebdo: Terror, racism and free speech published with Zed. His new book Reactionary democracy: How racism and the populist far right became mainstream, co-written with Aaron Winter, is now out with Verso.

Aaron Winter is Senior Lecturer in Criminology at the University of East London. His research is on racism and the far right with a focus on mainstreaming and violence. He is co-editor of Historical Perspectives on Organised Crime and Terrorism (Routledge, 2018) and Researching the Far Right: Theory, Method, Practice (Routledge, forthcoming). His new book, co-written with Aurelien Mondon, Reactionary Democracy: How racism and the populist far right became mainstream, is now out with Verso. He is also on the editorial board of Identities: Global Studies in Culture and Power and co-editor of the Manchester University Press series Racism, Resistance and Social Change.

Chantelle Lewis is a part-time PhD student in the Sociology department at Goldsmiths, UK. She is co-host of the sociological/political podcast Surviving Society; Programme Director of the Leading Routes campaign #BlackinAcademia; and is on the board for the International Centre on Racism at Edge Hill University. From 2017-2019 she was a Research Assistant on the ESRC-funded project (UK in a Changing Europe) BrExpats.

Tissot Regis is a full time PhD student in the Geography department at UCL, and a recipient of the Windsor Fellowship Scholarship. He is a co-host and co-founder of the political/sociological podcast, Surviving Society. He is a member of the board for the International Centre for Racism at Edge Hill University. His research interests cover whiteness, conviviality, race, multiculturalism, critical race theory, epistemology and history.

Fran Amery is a Senior Lecturer in the Department of Politics, Languages and International Studies at the University of Bath. Her research interests are in gender equality and feminist politics, and how they intersect with policy processes in the UK. She is also interested in intersectional organising in reproductive rights activism. 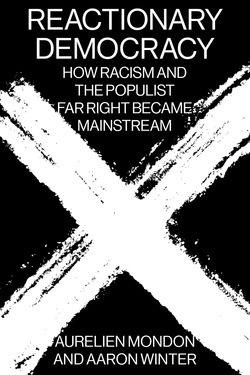 Reactionary Democracy
by Aurelien Mondon and Aaron Winter
30% off