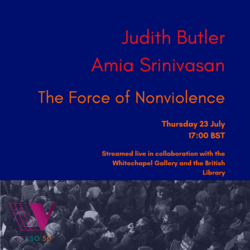 VERSO LIVE: Judith Butler and Amia Srinivasan
ONLINE
5.00pm - 6.00pm
ONLINE
Judith Butler presents a lecture and live Q&A chaired by Amia Srinivasan that draws on her new book, which shows how an ethic of nonviolence must be connected to a broader political struggle for social equality

The Force of Nonviolence argues that nonviolence is often misunderstood as a passive practice that emanates from a calm region of the soul, or as an individualist ethical relation to existing forms of power. But, in fact, nonviolence is an ethical position found in the midst of the political field.

By considering how ‘racial phantasms’ inform justifications of state and administrative violence, Butler tracks how violence is often attributed to those who are most severely exposed to its lethal effects. The struggle for nonviolence is found in movements for social transformation that reframe the grievability of lives in light of social equality and whose ethical claims follow from an insight into the interdependency of life as the basis of social and political equality.

Presented in collaboration with the British Library as part of Feminist Resistance: Strategies for the 21st Century in partnership with the Whitechapel Gallery, a programme marking Verso's 50th anniversary.

This event paves the way to the delayed opening of the British Library’s exhibition Unfinished Business: the fight for Women’s Rights, which will open in late October and energetically explore the themes of the “longest revolution.”

With the publication of Gender Trouble in 1990, Judith Butler became an academic celebrity. If not for Butler’s work, “you wouldn’t have the version of genderqueer-ness that we now have,” Jack Halberstam, a gender-studies professor at Columbia, once said. “[Butler] made it clear that the body is not a stable foundation for gender expression.” With the publication of Frames of War and Precarious Life, Butler broadened her scope by questioning how we define the human. Whose lives do we deem valuable and whose deaths are grievable? Her other works include The Psychic Life of Power, Excitable Speech and Bodies that Matter. Butler is Maxine Elliot Professor in the Departments of Rhetoric and Comparative Literature at the University of California, Berkeley.

Amia Srinivasan is a philosopher and writer, specialising in political philosophy, epistemology and feminism. Since January 2020, she has been Chichele Professor of Social and Political Theory at the University of Oxford. She is a contributor to the British Library’s Unfinished Business exhibition.