Throughout written history and across the world, women have protested the restrictions of gender and the limitations placed on women’s bodies and women’s lives. People–of any and no gender–have protested and theorized, penned manifestos and written poetry and songs, testified and lobbied, gone on strike and fomented revolution, quietly demanded that there is an “I” and loudly proclaimed that there is a “we.” The Book of Feminism chronicles this history of defiance and tracks it around the world as it develops into a multivocal and unabashed force.

Global in scope, The Book of Feminism shows the breadth of feminist protest and of feminist thinking, moving through the female poets of China’s Tang Dynasty and accounts of indigenous women in the Caribbean resisting Columbus’s expedition, British suffragists militating for the vote and the revolutionary petroleuses of the 1848 Paris Commune, the first century Trung sisters who fought for the independence of Nam Viet to women in 1980s Botswana fighting for equal protection under the law, from the erotica of the 6th century and the 19th century to radical queer politics in the 20th and 21st.

The Book of Feminism is a weapon, a force, a lyrical cry, and an ongoing threat to misogyny everywhere.

Jessie Kindig is an editor at Verso Books, and her writing has appeared in n+1, Artforum, Jacobin, and the Boston Review.

Sarah Leonard is editor of forthcoming socialist-feminist publication Lux. She is a contributing editor to Dissent and The Nation. Find her @sarahrlnrd.

Soraya Chemaly is Executive Director of The Representation Project and an award-winning writer and media critic She writes and speaks frequently on topics related to inclusivity, free speech, sexualized violence, data and technology. Soraya is also co-founder and director of the Women’s Media Center Speech Project and currently serves on the national boards of the Women's Media Center and Women, Action and the Media, as well as on the advisory councils of the Center for Democracy and Technology, VIDA, the Coalition for Women in Journalism, and Common Sense Media. She formerly served on the national board of Emerge America, which trains women at all levels of the political ladder to run for office; the advisory board of Secular Woman, the nation’s first secular women’s organization; and FORCE: Upsetting Rape Culture, an national arts-based anti-rape movement.  In 2015, she was named one of Elle magazine’s “25 Most Inspirational Women on Twitter.” In 2017, she and her co-author won a Mirror Award for Best Single Feature of 2016.  She is the recipient of a 2019 Feminist Power Award. Her 2019 TED Talk, The Power of Women’s Anger, has been viewed more than 1.9 million times in less than six months. Her recent book, Rage Becomes Her: Women and Anger, was named a best book of 2018 by Fast Company, Psychology Today, Book Riot and the Washington Post. 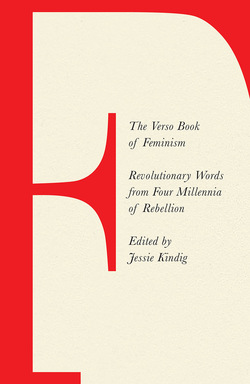 The Verso Book of Feminism
Edited by Jessie Kindig
30% off