Charis and the Auburn Avenue Research Library on African American Culture and History welcome Charisse Burden-Stelly and Jodi Dean in conversation with Tamanisha J. John for a book launch and signing in celebration of Organize, Fight, Win: Black Communist Women's Political Writing. The first collection of its kind, Organize, Fight, Win brings together three decades of Black Communist women's political writings. In doing so, it highlights the link between Communism and Black liberation. Likewise, it makes clear how Black women fundamentally shaped, and were shaped by, Communist praxis in the twentieth century. This event is co-hosted by the Black Alliance for Peace Atlanta Chapter. BAP is a people(s)-centered Human Rights project against war, repression, and imperialism.

This event takes place at the Auburn Avenue Research Library (101 Auburn Ave NE, Atlanta, GA 30303) and is free and open to the public. No ticket or reservation is required to attend. Books will be available for purchase from Charis Books and More. Masks are encouraged but not required. The event will be simulcast on the Auburn Ave Facebook page (https://www.facebook.com/AuburnAvenueResearchLibrary/) for community members who do not wish to attend live.

Black Communist women throughout the early to mid-twentieth century fought for and led mass campaigns in the service of building collective power in the fight for liberation. Through concrete materialist analysis of the conditions of Black workers, these women argued that racial and economic equality can only be achieved by overthrowing capitalism.

Jodi Dean teaches political, feminist, and media theory in Geneva, New York. She has written or edited thirteen books, including The Communist Horizon and Crowds and Party, both published by Verso.

Jodi Dean
“Jodi’s sharp analysis of the impasses of the left is also a kind of requiem for much of the 2.0 bluster of the last decade.” —Mark Fisher,
Charisse Burden-Stelly 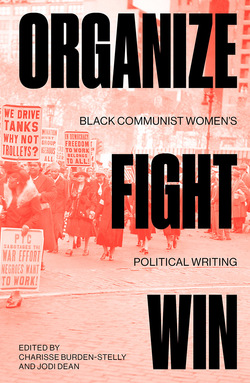 Organize, Fight, Win
by Charisse Burden-Stelly and Jodi Dean
40% off