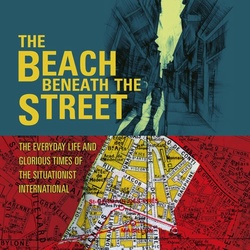 The University of Sussex, Brighton is organising a one-day conference on Situationist Aesthetics, featuring as a keynote speaker McKenzie Wark, author of The Beach Beneath the Street.

Is it oxymoronic, heretical or just plain wrong to talk about Situationist aesthetics? The Situationist International (SI) condemned attempts to discuss its work in terms of aesthetics, but perhaps it is now time to brush the SI against the grain.

When it first announced its programme, the SI insisted that ‘There is no such thing as Situationism'. A few years later, before expelling its members deemed to be too invested in artistic production, the SI declared that in an age of spectacle any work of art produced by a Situationist must necessarily be ‘antisituationist'. The SI's tactical intransigence regarding the political value of the aesthetic, and its refusal of the possibility of a specifically Situationist aesthetic, threw up problems that remained unresolved by the time of the SI's dissolution. Since 1972, particularly in Anglophone contexts, Situationist practices have penetrated an array of cultural spheres, and much cultural production which the SI would have dismissed as spectacular has claimed some Situationist influence.

The SI located itself within but against culture. This symposium asks whether such a position is tenable, and what possibility might there be for Situationist aesthetics after all. Do cultural phenomena such as punk, or the current psychogeography industry, for example, work as or against Situationist aesthetics? Is it possible to identify art works and/or practices indebted to the SI that do not recuperate its politics but fortify and develop them?

Keynote speaker: McKenzie Wark (The New School, NY), author of The Beach Beneath the Street: The Everyday Life and Glorious Times of the Situationist International (2011), Gamer Theory (2007) and Hacker Manifesto (2004).

The conference is currently accepting submissions of proposals for papers or presentations.