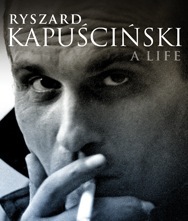 Voted journalist of the century in his native Poland Ryszard Kapuściński is renowned across the globe for his coverage of the developing world during the final stages of European colonialism.

Whilst covering revolutions and coups across Africa throughout the '60s and '70s he was known to carry two note books. One he would use to record the facts used in his reports, the second for observations and experiences that would form the content of his many books that in his 40s gave him fame on the global stage. He described his work as "literary reportage" which allowed him to translate incommunicable stories of suffering from the developing world to audiences in the developed world.

We will be joined by a panel including Artur Domoslawski the author of Ryszard Kapuściński: A Life to discuss the work of this renowned journalist and his influence on journalism today. We will be asking to what extent Kapuściński blurred the line between journalism and literature.

Chaired by Charles Glass, a broadcaster, journalist and writer, who began his journalistic career in 1973 at the ABC News Beirut bureau and was chief Middle East correspondent from 1983 to 1993. Since then, he has been a freelance writer, regularly covering the Middle East, the Balkans, southeast Asia and the Mediterranean region.

Artur Domoslawski, a writer on international politics for the weekly review Polityka and for the Polish edition of Le Monde Diplomatique, and for two decades reported for the Polish daily Gazeta Wyborcza. In 2010 he received Poland's prestigious Journalist of the Year award. A Knight Fellow at Stanford University in 2005-6, he is the author of five books, and is currently working on a book about contemporary Latin America.

Neal Ascherson, a journalist and writer. Over a long career in journalism, he has written for the Observer (1960-90) and theIndependent on Sunday (1990-8). Among his books are The King Incorporated: Leopold the Second and the Congo; The Struggles for Poland; Black Sea; and Stone Voices: The Search for Scotland.

Additional panelists to be confirmed.

Ryszard Kapuściński: A Life is supported by the Polish Cultural Institute and English PEN's Writers in Translation programme. Now in to its seventh year, the programme aims to celebrate books of outstanding literary value, dedication to free speech and inter-cultural understanding.