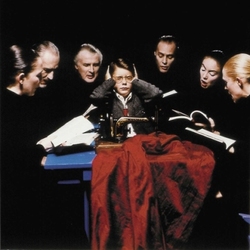 To mark 40 years of independent, radical publishing, Verso is celebrating its philosophy titles with a screening of the Tariq Ali-produced Wittgenstein, Derek Jarman's innovative portrait of Ludwig Wittgenstein.

A seminal thinker of the twentieth century, Wittgenstein's revolutionary ideas have had an impact in disciplines beyond philosophy including psychology, the natural sciences, linguistics, mathematics, logic, art, religion, artificial intelligence and software design.

Derek Jarman's Wittgenstein was to be part of a series for Channel Four entitled The Philosophers, for which the producers had already commissioned four different scripts: Howard Brenton on Socrates, Tariq Ali on Spinoza, David Edgar on Locke, and Terry Eagleton on Wittgenstein.

Jarman's penultimate film is charged with lush and elegant images evoking the philosopher's thinking with his usual mastery.

The screening is followed by a discussion with the film's producer Tariq Ali and Jonathan Derbyshire, culture editor of the New Statesman.

In collaboration with the