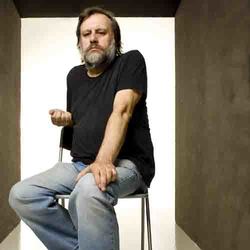 "Žižek leaves no social or cultural phenomenon untheorized, and is master of the counterintuitive observation." New Yorker

"A great provocateur... Žižek writes with passion and an aphoristic energy that is spellbinding." Los Angeles Times

"Unafraid of confrontation and with a near limitless grasp of pop symbolism." The Times

Slavoj Žižek is today's most controversial public intellectual. His work traverses the fields of philosophy, psychoanalysis, theology, history and political theory, taking in film, popular culture, and literature to provide acute analyses of the complexities of contemporary ideology as well as a serious and sophisticated philosophy. The author of over 30 books, Slavoj Žižek's provocative prose has challenged a generation of activists and intellectuals. His latest work is Living in the End Times.

Now Žižek will make a major New York City appearance at Cooper Union on November 8 to discuss the "End Times"—in which he identifies the terminal crisis of global capitalism. As Slavoj’s events always sell out, tickets have to be bought in advance. Twenty-dollar tickets include a FREE copy of Living in the End Times, worth $29.95. (Already have one? Then give your new copy to a friend who's in ideological denial ...) Student tickets, without a book, are available for $10.

Called the "Elvis of cultural theory" and the "greatest intellectual high since anti-Oedipus" Žižek's work has appeared in the The New York Times, the New Yorker and The Guardian, and he has appeared in Astra Taylor's feature length films Zizek! and Examined Life. He is a professor at the European Graduate School, International Director of the Birkbeck Institute for the Humanities, Birkbeck College, University of London, and a senior researcher at the Institute of Sociology, University of Ljubljana, Slovenia.