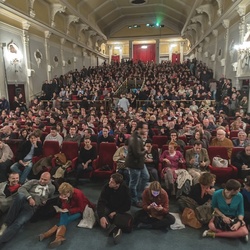 After waves of protests in the past few years—from North Africa, the Middle East and New York to Frankfurt, Madrid, London, Athens, Bucharest, Sofia, Zagreb and other parts of Europe—whose goal was to force the ruling structures to act in the interest of the general public, it is difficult to determine whether any actual breakthroughs were achieved, apart from the rise of a new political subject – active citizens committed to true democracy and social justice. At the heart of all these uprisings are expressions of a wish for a real democracy, which have been seemingly absorbed by the ruling elites with almost no consequences for the established power relations. A serious discussion about political and utopian potentials of democracy is more necessary than ever.

What is actually un-democratic in systems that call themselves democracies, and how does one build a true democracy? Is democracy an unattainable or an achievable utopia? Is this utopian inspiration a prerequisite for any emancipatory struggle? Following these questions, as well as taking into account current social and political developments, the 6th Subversive Festival, under the general theme The Utopia of Democracy, will take place from May 4-18 2013 in Croatia’s capital Zagreb.

This year the Subversive Festival once again will offer a space for serious political, social and cultural analysis aimed at questioning and finding alternatives to challenge and change local and global power relations. By raising complex questions and tackling them through various and even opposing perspectives, the Subversive Festival has built a wider international community but also an ever-growing regional audience. It has been recognized as the main regional partner of international organisations and movements such as the World Social Forum,AlterSummit (Joint Social Conference), Attac, the World Forum for Alternatives andTransform Europe and it actively cooperates with Rosa Luxemburg Stiftung and Heinrich Böll Stiftung.

Visit the Subversive Festival website for further details, including the full line-up of events and speakers, as well as ticket information.