The sex industry is an endless source of prurient drama for the mainstream media. Reporting tends to focus on the most extreme cases of trafficking and abuse. Outside of that, the current trend for writing about and describing actual experiences of sex work fuels a culture obsessed with the behaviour of sex workers. Rarely do these fearful dispatches come from sex workers themselves, and they never seem to deviate from the position that sex workers must be rescued from their condition, and the industry simply abolished.

In her new book Playing the Whore:the Work of Sex Work Melissa Gira Grant argues that current debate around sex work, including most feminist discussion, is pointless and unhelpful. She believes that we need to shift the focus onto the producers of anti-sex work discourse: police, feminists, politicians and anti-prostitution campaigners. Sex workers' demands, too long relegated to the margins, take center stage in this book: sex work is work, and sex workers' rights are human rights.

Based on ten years of writing and reporting on the sex trade, and grounded in her experience as an organiser, advocate, and former sex worker, Playing the Whore dismantles pervasive myths about sex work, criticises conditions within the sex industry and its criminalisation, and argues that separating sex work from the “legitimate” economy only harms those who perform sexual labour. Join Melissa and Laurie Penny as they discusses the many issues currently under debate in sex work.

This event will start at 6.30pm on Thursday 27th March at Foyles, Charing Cross Rd. Tickets are £3 and can be purchased here.

Melissa Gira Grant a writer and freelance journalist covering sex, tech, and politics, in the streets and everywhere else. She's a contributing editor at Jacobin, and her reporting and commentary appears in The Guardian, The Nation, Glamour, The Washington Post and Jezebel among other publications. Join her as she debates the need for a complete overhaul in they way we think about sex workers and the industry more widely.

Laurie Penny is a journalist, an author, a feminist and a net denizen. She is Contributing Editor at New Statesman magazine, and writes and speaks on social justice, pop culture, gender issues and digital politics for The Guardian, The Independent, Vice, Salon, The Nation, The New Inquiry and many more. She is the author of Cybersexism, Penny Red and Meat Market: Female Flesh Under Capitalism, as well as Discordia: Six Nights in Crisis Athens, co-authored with Molly Crabapple. Her forthcoming book, Unspeakable Things, will be published by Bloomsbury in 2014. 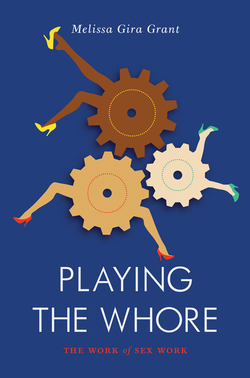 Playing the Whore
by Melissa Gira Grant
40% off