Nisha Kapoor is  Assistant Professor in Sociology at the University of Warwick, and was awarded an ESRC Future Research Leaders Award 2015–2018. She is the co-editor of The State of Race. 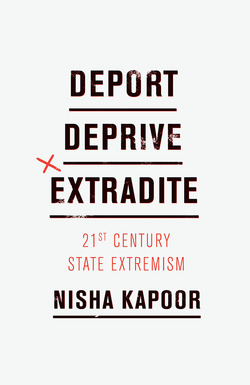 Citizenship deprivation at the nexus of race, gender and geopolitics

The case of Shamima Begum, the nineteen year-old who ran away to Syria from her home in East London in 2015, is now well known. Yet, the most striking thing about it is not the enactment of the deprivation of her citizenship but the scale of media attention it has received. In this essay, Nisha Kapoor puts the actions of the British state against Begum in its political and historical context.

Nisha Kapoor discusses Islamophobia, the War on Terror, the adoption of counterinsurgency tactics in the UK, and the government's 'Prevent' counter-terrorism programme and its effects on Britain's Muslim population, with Alex Doherty on the Politics Theory Other podcast

On Windrush, Citizenship and its Others

Nisha Kapoor, author of Deport, Deprive, Extradite, locates the recent Windrush scandal in the long history of empire. Kapoor thinks through the role of citizenship as a tool of empire, showing how imperialism continues to pervade our everyday life. How do we think and do anti-racism? Connections must be made between the Windrush scandal, the War on Terror and deportation targets: all projects of state violence are an attack on our civil liberties.