40% off EVERYTHING!
about 1 month left
Lindsey GermanJohn Rees
comments

A People's History of London: The Olympics

The London of the twenty-first century is reproducing the conditions that gave rise to radical and socialist ideas in the past. Glittering skyscrapers are transforming the London horizon more quickly than ever before. The city is moving east again, creating a huge pool of poverty bordered by wealth in the City, Canary Wharf and the new Olympic development in Stratford. But this is only the most visible form of the inequality that is growing across the metropolis.

As the 2012 Olympics open, motorcades of dignitaries, politicians, company CEOs and celebrities will sweep through East London on the specially cleared executive super-highway to Stratford that is only open to them. A few yards away, in damp and overcrowded blocks of flats, Black, white, and Asian workers will be preparing to go to work, if they are lucky, in jobs that pay a pittance. Perhaps they will be serving coffee to, or clearing up after, those very same people. For centuries in London such contrasting conditions have produced riots and radicalism, strikes and socialism. That history is unlikely to be over.

London was one of the first hosts of the modern Olympic Games. Recently recreated from their ancient and long-forgotten origins in ancient Greece, their new setting was growing rivalry between the great powers. Originally planned for Rome, the 1908 Games were relocated to London following the eruption of Mount Vesuvius near Naples. As with the 2012 Olympics, they were closely connected with the promotion of business interests. The organizers of a trade fair being held by France and Britain in London agreed to build a new Olympic stadium, in return for the majority of the takings from the Games.

The site of the trade fair was in Wood Lane near Shepherd’s Bush, on ‘a bit of farm land lying half-forgotten at the very doorstep of London’.4 The White City site saw the erection of dazzling palaces on drained marshland. Four thousand workers were on the site by day, while the night shift numbered 2,000. There were allegedly many injuries and some fatalities, but the complex went up rapidly, and emerged with lakes, a funfair and many pavilions highlighting not just British and French industry but the economic role of their colonies in India and Africa.5 The athletics stadium and swimming pool were built there, and visitors arrived by Tube at Wood Lane station or Shepherd’s Bush.

The Games themselves often descended into farce or open conflict. The Irish-American flag bearer for the US team refused to lower the stars and stripes when he passed King Edward VII at the opening ceremony. One of his colleagues reportedly declared ‘this flag dips to no earthly king’. This was only one in a string of conflicts between the US and British teams which ended in mutual recrimination. While the Games attracted massive crowds to London, they were less than successful as a sporting or political event

London won the bid for the 2012 Olympics in 2005. Backed enthusiastically by the Labour mayor, Ken Livingstone, it has regularly been hailed as a pathway to regeneration, jobs and housing in the east of London. It has certainly lent further impetus to the eastward shift of the city. The main stadium and Olympic village were to be built on wasteland in Stratford in the borough of Newham and thus began a massive programme of public investment in buildings, transport and publicity about the event. But the site was not quite as empty as Londoners were led to believe. It had to be cleared of its residents and workers, and of the allotments which had been so lovingly cared for by those who rented them. Most of the people who lived and worked in the designated area (once railway land in a major junction near the docks, and bordered by a canal, a river and motorways) were poor. They were clearly not the people who would be occupying the new blocks of flats which now sprang up in every space.

The new Olympic site has already required the removal or social cleansing of a range of encumbrances, including a travellers’ camp, council tenants, small businesses and allotments. Sections of Hackney Marshes – a green space in one of the poorest parts of London and one of the biggest amateur football venues in London – are to be concreted over to provide coach parks for Olympic visitors. Narrowboat dwellers on the river Lea which runs along the edge of the site are threatened with eviction unless they pay mooring fees almost ten times the level which they previously paid. Sally Ash, representing British Waterways, said: ‘we have to send the message that in future, living on the river will not be such a cheap lifestyle option’. 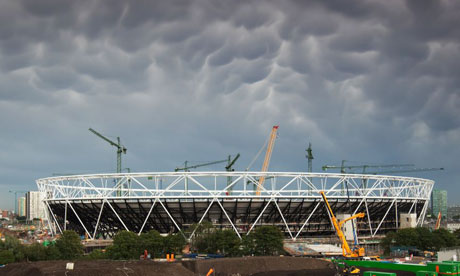 The whole Olympic project is likely to cost up to £9 billion, and promises to be a bonanza for property companies, retailers, security guards and hotel chains if previous Games are anything to go by. The Westfield Stratford City (with its own E20 postcode) has such a role in the Olympic experience that most spectators arriving at the Games by public transport will have to go through the shopping mall to reach their destination. Likewise, those wanting to exit the ‘legacy’ Olympic Park on its east side after the Games are over will do so through Westfield.

Londoners are being asked to pay extra council tax to fund the extravaganza, but have received no benefits in return for this investment. Seat prices for the opening ceremony run into thousands of pounds. Tickets were oversubscribed, but those able to pay an expensive hotel package during the Games will be able to buy their way in. Super-highways are being prepared to speed politicians, businessmen and athletes along East London’s congested roads, while the ticketless watch resentfully from the pavements. Meanwhile, sports and youth facilities across London are being cut as part of the government’s austerity measures.