An extract from A New Kind of Bleak: Journeys Through Urban Britain by Owen Hatherley

The reason why this is all able to occur is easy enough to discern; it’s there in front of you, everywhere you turn in Poplar, with that air-traffic alerting light flashing on and off the pyramid at the top, winking mockingly at you. Canary Wharf, like the first City, is breaking its banks, and spreading bankster colonies all over the borough of Tower Hamlets. As we have grown to expect, the financial crisis they triggered (Lehman Brothers and AIG did their naughtiest things here) has not led to any noticeable contrition or humility. From Poplar we could make our way into the Isle of Dogs itself, to peruse its glass and steel, or to jeer at the way that the kitsch of the ’80s still sits around it, dating the place horribly; we could walk around the mean, low-ceilinged shopping mall that sits under the central phallus of One Canada Square, the pyramidal erection dubbed at the time ‘Thatcher’s Cock’. We won’t, however. We ’ll head away from this Thatcherite landscape with its Fosterian Blairite appendages to a much purer space of New Labour, just to finally give them their due, for their most large-scale experiment in the planning of a wholly new, tabula rasa district of the capital.

I ought to be brief, or as brief as possible, on the subject of the Olympic Site. 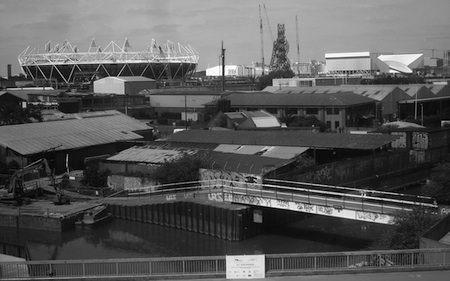 Being based south of the river I try and avoid the place, but architectural correspondents who live and work in East London, like Douglas Murphy, Kieran Long or Oliver Wainwright, have all written superb and detailed indictments of the place, have buried it time and again, although admittedly without managing to shame the Olympic Delivery Authority into the hoped-for mass resignation. By the time you read this it may all be over, the fireworks, the pageants, the unmanned drones, the stationing on-site of US missiles, the enormous police and army presence, the medals or not-medals, the terrorist attacks or notterrorist attacks. That doesn’t matter. It’s all about the Legacy. Ken Livingstone admitted as much several times – the point was not to have a sports event in London, the point was to extort some funding for the redevelopment of a massive swathe of derelict London, a light-engineering swathe along the river Lea that had long since gone to seed, a typical stretch of Thames Gateway post-industry.

And why not? Many writers have mourned the demise of the Lea Valley, London’s last great wilderness. I remember it well, the paths along the outfall sewer, the random collections of industrial waste, the abundant and unusual bird and plant life; there are still a few similar spaces on the other side of the Thames, and practically dozens outside of London. Nonetheless, there was a uniqueness to the Lea Valley Zone, and the effacement of it by an enormous project of speculation and imposed redevelopment is hard to conceive as a victory for the people of London. Just imagine, though, if the GLA was the GLC, a well-funded, powerful body able and willing to stand up to the City and the government, and they proposed to redevelop this area. Imagine that they too used an Olympics as a pretext, and connected the new suburb to the DLR, the Jubilee Line, Crossrail and even the railway to the Continent. Imagine that the country’s most famous architects were hired, by subterfuge or otherwise, to design its public buildings, while an immense landscaping project provided a new public park. Imagine that a rigorously planned new housing development with a secondary school as part of it was an integral part of this new district. I can’t say I’d protest. More than that, I can say I’d be the first to hail the bloody place as everything London desperately needs, especially impoverished, overcrowded, overstretched East London. I’d be declaring Ken Livingstone the greatest living Englishman, the man who used running, swimming and shot-putting as the pretext to build a magnificent new city for the masses of London. It isn’t a particularly useful thought experiment, as this isn’t what is happening. All of the above features in Olympian Stratford in some manner, but all of it is coming into being as an act against London – the creation of yet another security-obsessed, enclosed, gated enclave set up to mock the idea that we could become more rather than less equal.

The new Stratford is really several different sites, all of them distinct, fitting into a larger plan. There is the redevelopment of Stratford High Street into a series of speculative high-rise towers; there is the ‘town centre’, a huge enclosed Westfield shopping mall; there is the Olympic Village, a housing development to accommodate the athletes, their PAs and associated bureaucrats; and there is the Olympic Site itself, a flowing park dotted with sports facilities by various architects. They don’t fit together terribly well, but all of them are in their own way extremely ambitious. The biggest, although in design terms by far the worst part, is Stratford High Street. Under the laissez-faire jurisdiction of the London Borough of Newham, a half-dozen or more towers have sprouted atop an already congested and miserable thoroughfare. Lower buildings, of so poor a spatial standard and build quality that they resemble clumsily re-clad council estates rather than new buildings, occupy the spaces in between. The towers are nearly all by the same firm, Pseudomodernists Stock Woolstonecroft, who were surely as surprised as anyone when they were essentially allowed to build an entire Mini-Manhattan of buy-to-let hutches with catchy names – Aurora! Icona! Each tower is clad in multiple tacky materials, the usual trick for hiding the fact that there ’s no orientation to the sun, no double-aspect flats, and a whopping great big dual carriageway just below your pink aluminium balcony.

The Olympic Village itself would be entitled to look down its nose at such things. Although the development was widely ridiculed for the fact that the athletes’ dormitories were so small that it would be difficult to sell the flats on, even in the country with the lowest space requirements in Europe, this publicly-funded development has been bought up in toto by Qatari Diar, who can presumably knock through the partitions in these concrete framed blocks. They are as uniform and ordered as Stratford High Street is chaotic and headstrong; mostly of around eight storeys, often masonry clad with expensive materials, with individual plots let to some fairly respected architects. The result is uniform in a rather scary way. From the Westfield car park, it resembles the peripheral estates of the late Soviet Union, which also stood in public squares at eight-to-ten storeys, and which were also often surrounded with an indeterminate kipple. Nearly every architect has taken the same approach to softening that sense of regimentation, and unfortunately it’s the biggest cliché in the contemporary architect’s book – the barcode façade, the staggered fenestration that apparently makes a big building look less monumental, which of course means that you do not perceive that bigness as a virtue, but rather as something that the designers are embarrassed about (to see how it’s done, take a trip to the Brownfield Estate). Only one architect has tried to have a bit of fun with his very limited parameters – Niall McLaughlin, who has covered his eight storeys in prefabricated panels taken from casts of the Parthenon Frieze, an elaborate and almost amusing joke about the dichotomy here between prefabrication and craftsmanship. Next to all of this is a very large, AHMM-designed City Academy, so that wealthy parents don’t have to worry about their kids mixing with the most multiracial and multicultural place that has ever existed in human history. Who knows, they might have learnt something. As there is a school, so there is a local shopping centre. There was and is already a big covered mall in Stratford, the deeply unlovely Stratford Centre, an overdeveloped and overscaled brick-clad monolith that one of the Olympic site ’s public sculptures is specifically designed to hide. You can’t quite hide it from

Westfield Stratford City itself, though, as it is directly opposite. The Westfield is a typical example of the Mall as it is now practised. There are ‘streets’ outside as well as enclosed passageways, and there is an office-block skyline on top to try and make it look more like a place. Inside is an unpretentious consumption factory, which has made none of the AA-student deconstructivist gestures that the cousin mall in Shepherd’s Bush condescended to provide for the roving eye. It’s just a big mall, like every other big mall, but with a few little concessions to contemporary taste.

On the lowest level is the ‘market’, where dun-coloured tiles let you know that you’re somewhere homely; lots of boutique chain shops, the Guardian-reader sort that you might otherwise see outside the Festival Hall or inside St Pancras International. This bit is obviously for the residents of the Olympic Village; the rest services and/or leeches on the more workaday tastes of East London and Essex. On the way to the toilets, a wall features several photographs of old East London Markets, an appeasing of the slain ancestors that is even more profoundly evil than in Bluewater.

What of the Olympic site itself? Everything is dominated by the ArcelorMittal Orbit, a shocking pink entrail laterally curved around an observation tower, famously commissioned by Boris Johnson in the toilets of a fundraising dinner from steel magnate Lakshmi Mittal, who provided the metal in return for the monument being named after him. There’s a faintly sick irony in this ex-industrial zone being overlooked by an edifice dedicated to a prolific downsizer and asset-stripper of factories, but that aside, there are buildings to enjoy, if you can keep from your mind the town-planning abortion that has been wreaked upon Stratford. You can enjoy the way that Michael Hopkins’s velodrome manages to be far more impressive and flowing a space than Zaha Hadid’s similar, but far more expensive Aquatics Centre, with its ungainly temporary wings. You can admire the economy of steel members in the Olympic Stadium itself. There’s a good brick substation by Nord. If you think that’s enough, good luck to you. Counterfactuals aside, when sticking to the neoliberal orthodoxy it’s hard to imagine that this could have been different. Some of the buildings might have been better, the social condenser for the new suburb might not have been a big box mall, there might have been more ‘affordable ’ housing, but hold them to their own terms and that’s about all you can really throw at the GLA or the ODA. This is why they are not fit to even begin to speak about their forebears in Poplar. They conformed, they fell into line, and they even seem to feel proud of it. Someone else has to fight for the forces their Party once claimed to represent. In the meantime, there’s a ready-made, enclosed yuppie New Town here just ready to be used as a post-apocalyptic film set. Dystopia for rent. No DHSS.