40% off EVERYTHING!
about 1 month left
Molly Osberg
comments

Beyond America's "one night democracy special"

This time a year ago, Occupy camps across the country found themselves dismantled, handcuffed, and power-washed away in a move coordinated by several city administrations, forcing the network of activists and anti-capitalists who once gathered in those public spaces to find alternative modes of protest.

A year later, at least here in New York, that network is leaping into action with a speed and force that's caused even the apparatus of the state -- FEMA and the National Guard, most notably -- to recognize Occupy Sandy and on some occasions seek its aid. Its a testament, at the very least, to the organizational prowess of a movement that has been continuously churning out projects, if not media-mandated spectacle, throughout 2012.

Sarah Leonard, one of the editors of last year's Verso title Occupy!: Scenes from Occupied America and a member of the Dissent Magazine team, recently surveyed the post-election landscape.

"When you get right down to it," writes Leonard and colleague Tim Barker, "the things we want are not on the ballot. Electoral politics currently highlight the weakness of the left rather than providing terrain on which it can fight."

There are a number of territories on which to fight the battle, but today in particular Strike Debt is rising to the challenge. The project, organized through meetings this summer between several post-occupy groups, has steadily gained momentum in building an anti-debt movement through the synthesis of credits individual, national, and sovereign. This fall, they produced the "Debt Resistor's Operations Manual," an assiduously researched pamphlet explaining the credit industry--along with its faulty assumptions and notable loopholes.

Today is a good day to read the Manual, and to brush up on Strike Debt. Tonight the group--which includes documentary filmmaker Astra Taylor, another Verso contributor--holds their much-hyped Rolling Jubilee, a telethon and variety show as part of their campaign so named for the biblical event in which those in bondage are set free.

The Rolling Jubilee buys bad debt for pennies on the dollar and abolishes it; a $10 donation, for example, liberates an anonymous debtor from $200 worth of debt. Tonight the collective, who as of this writing have raised $198,428 (which could abolish $3,973,386 worth of debt), are holding an event at New York's Le Poisson Rouge to be live- streamed across the country in hopes of raising even more.

Though Strike Debt has been relatively well-received, the project isn't without its critics: Doug Henwood recently wrote an article questioning the mechanics of debt repudiation. Dissent has since published an exhange between Rolling Jubilee organizer and NYU Professor Andrew Ross and Jacobin editor Seth Ackerman. The correspondence, which touches on subjects from the viability of a true debt strike to the prospective use of the term "mutual aid" as a unifying concept among the American left, surely deserves a place on the reading list for those of us pondering the tactics of change post-election. 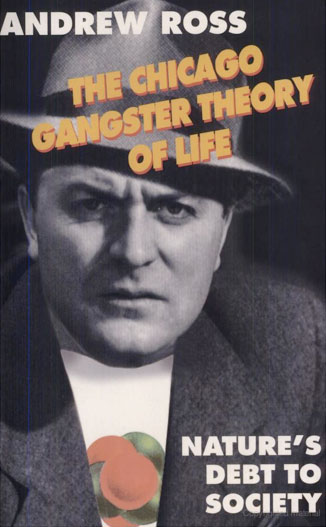 The Chicago Gangster Theory of Life
by Andrew Ross