40% OFF ALL OUR BOOKS!
about 1 month left
Lewis Bassett
comments

The real Church of the poor by Michael Löwy

Translated for Verso by David Broder. The orginal article appeared in Le Monde on 30 March 2013 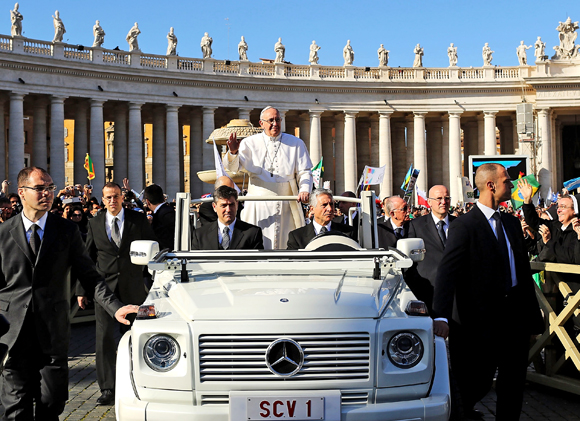 The first Latin American pope, Francis, appears to want to distinguish himself from the ideas and practices of his predecessor, harking back to St. Francis of Assisi and placing the question of poverty at the centre of his pontificate. But, being of South American origin, is he close to liberation theology? There’s reason enough to doubt it…

What is commonly referred to as liberation theology – a body of texts produced from 1971 onwards by figures like Gustavo Gutierrez, Hugo Assmann, Frei Betto, Leonardo Boff, Pablo Richard, Enrique Dussel, Jon Sobrino, and Ignacio Ellacuria, to namely only the best known – is but the intellectual and spiritual expression of a vast social movement, born at least a dozen years previously, as displayed in close-knit popular pastoral networks (of peasants, workers, city-dwellers, indigenous people, and women), grassroots ecclesiastical communities, district groups, Justice and Peace commissions, and Catholic Action formations, which actively adopted the ‘preferential option for the poor’.

This did not take the traditional form of charity, but rather concrete solidarity with poor people’s struggle for liberation. Without taking account of the practice of this social movement – which we might call liberation Christianity – it is impossible to understand socio-political phenomena as important to the recent history of Latin America as the upsurge of revolution in Central America - in Nicaragua and El Salvador – the emergence of a new workers’ and peasants’ movement in Brazil, or the Zapatista uprising in Chiapas.

A COMMUNITARIAN RELIGION OF SALVATION

Liberation Christianity, and in particular the grassroots ecclesiastical communities, does not pertain to the paradigm of a ‘Church’, nor that of a ‘sect’, but rather what the sociologist Max Weber (1864–1920) in 1915 called a communitarian religion of salvation; that is to say, a form of religiosity founded on a religious ethic of brotherhood – whose source is the ancient economic ethic of neighbourhood – even able to result, in certain cases, in a ‘communism of fraternal love’.

If we had to summarise the central idea of liberation Christianity in one single formula, we could look back to the expression sanctified by the Puebla conference of Latin American bishops of 1979: ‘the preferential option for the poor’. What was new about this?

Had not the charity of the Church always been attentive to the suffering of the poor? The difference – of capital importance – was that for liberation Christianity, the poor were no longer perceived as simple objects (of help, of compassion, of charity) but as subjects of their own history, the agents of their own liberation.

The role of socially engaged Christians was to participate in this long march of the oppressed towards the Promised Land, freedom, in bringing their contribution to their self-organisation and social self-emancipation.

The other difference was the charitable stance and the Church’s tradition of giving aid – well represented by the new Argentinian Pope – was formulated many years ago by the Brazilian cardinal Dom Helder Camara ‘When I give food to the poor, they call me a saint. When I ask why the poor have no food, they call me a communist’.

Throughout the 1960s and 1970s, military regimes were established in many Latin American countries: Brazil, Chile, Argentina and so on. The militants of liberation Christianity actively participated in the resistance to these dictatorships, and greatly contributed to their decline, which began in the 1980s. They were an important, sometimes even decisive, factor in the democratization of these states.

In Brazil, during the 1970s, the Church of the poor appeared, in the eyes of civil society as well as the ruling officers themselves, as the main adversary of the dictatorship: an enemy more powerful (and radical) than was the (docile) tolerated parliamentary opposition.

Opposite to the Brazilian case, in Argentina, the Church, historically close to the authoritarianism of the army, mostly supported the atrocious military dictatorship, responsible, in the years 1976 to 1983, for thirty thousand deaths and ‘disappearances’. Many Christians, whether clerics or members of the laity, paid with their lives for their involvement in the resistance to authoritarian regimes in Latin America, or simply for their denunciations of torture, murders and human rights violations.

Such was the case of El Salvador’s archbishop Oscar Romero, killed by paramilitaries in March 1980, as well as Ignacio Ellacuria and his five Jesuit colleagues at the Central American University of El Salvador, murdered by the army in November 1989.

In 1985 the Vatican condemned liberation theology – by means of the Congregation for the Doctrine of the Faith, presided over by cardinal Joseph Ratzinger, later Benedict XVI – as a heresy ‘all the more dangerous the closer it is to the Truth’… For the Vatican, the rule remained Roma locuta, causa finita (Rome has spoken, the case is closed).

Nonetheless, liberation theologians continued, each in their own way, to stand up for their interpretation of Christianity. Some, such as Leonardo Boff, preferred to quit the Church in order to preserve their freedom of expression; others, like Gustavo Gutierrez, avoided intra-ecclesiastical conflicts, without however renouncing their convictions and their engagement.

INTEGRATING THE CHALLENGES OF MULTICULTURALISM

That is not to say that their thinking did not evolve. On the contrary, it opened new pathways, analyzing the oppression of women, of black communities and of indigenous people: it integrated the challenges of multiculturalism and ecology, of religious pluralism and of interfaith dialogue.

And, to start with, it subjected to theological and political critique neoliberalism, namely the new form taken in Latin America by the system, to their eyes intrinsically perverse, that is capitalism.

In this context, certain theologians would develop a new relationship with Marx’s thinking, in order to critique neoliberal capitalism as a false religion founded on the idolatry of the market and the cult of the god Mammon.

For these theologians, like Hugo Assmann or Franz Hinkelammert, the new capitalist idols of money, profit and foreign debt, like those denounced by the prophets of the Old Testament, are the Molochs demanding human sacrifices – an image used by Marx himself in Das Kapital.

Liberation Christianity’s fight against the idolatry of commodities is, in their eyes, a battle of the gods between the God of life and the idols of death (Jon Sobrino) or between the god Jesus Christ and the multiplicity of gods of the capitalist Olympus (Pablo Richard).

A NEW PARADIGM OF CIVILISATION

In recent years, the critique of capitalism has been more and more associated, for liberation theologians, with the problematic of ecology. The pioneer on this terrain was Leonardo Boff, for a long time concerned with the environment, which he addresses simultaneously out of a mystical, Franciscan spirit of love for nature, and with the perspective of a radical critique of the capitalist system. The new paradigm of civilisation must be founded on a planetary solidarity and ethic of life.

Without doubt, the influence of liberation theology has been in retreat in many countries across the continent. Following the nomination of bishops by Wojtyla (John Paul II) and Ratzinger (Benedict XVI), the Latin American episcopate has become much more conservative. Even those who adopt progressive positions at the social level share the Vatican’s conservative take opposing women’s right to self-determination over their bodies (divorce, contraception, abortion).

That said, in a country like Brazil, liberation Christianity still has a significant presence, within grassroots communities, popular pastoral activities, lay movements or networks like Faith and Policy, led by the Dominican theologian Frei Betto, which brings together thousands of supporters across the country.

Moreover, socially engaged Christians were one of the most active components of the alterglobalisation movement in the 2000s, notably, but not only, in Brazil, the country which welcomed the first meetings of the World Social Forum. One of the Forum’s initiators, Chico Whitaker, a member of the Justice and Peace Commission of the National Conference of Brazilian Bishops, belongs to this current.

It is difficult to foresee what will be the future of liberation Christianity in Latin America. Its socio-religious rootedness has allowed it to persist despite the active opposition of the two last pontiffs.

Whatever Pope Francis’s attitude towards it, it is likely that it will continue to practice the ‘communism of fraternal love’ of which Max Weber spoke…

Michael Löwy is a French-Brazilian sociologist. Emeritus director of research at the CNRS [National Centre for Scientific Research]. His books and articles are devoted to the updating of Marxist thinking and its link with religious messianism and utopian spirit.