40% off EVERYTHING!
about 1 month left
Jisu Kim
comments 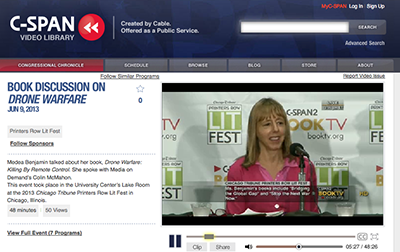 Medea Benjamin, anti-war activist and author of Drone Warfare, appeared at the 2013 Chicago Tribune Printers Row Lit Fest with Tribune foreign correspondent Colin McMahon. In this discussion, Benjamin discussed the motivation behind writing her book, the government’s lack of acknowledgement concerning drones, and the disturbing precedent that drone warfare sets for the future. She recounts from her investigative research, recalling how those in targeted areas denounce drone warfare as “a form of collective punishment… ‘In your war on terror, you are terrorizing our communities’”.

Click here to access the BookTV video of the talk in full at the C-SPAN video library.