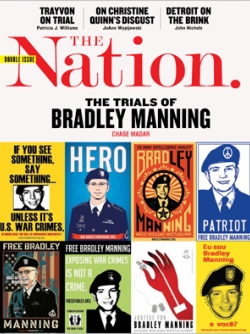 Pick up a copy of the August 17 issue of The Nation Magazine, on stands this weekend, for attorney and The Passion of Bradley Manning author Chase Madar's outstanding, exhaustive piece on the trial of the century—that of 25-year-old Wikileaker Private First Class Bradley Manning.

The panicky response to WikiLeaks from some liberals has had its opera buffa highlights. WNYC radio host Brian Lehrer and New Yorker liberal hawk George Packer clucked like wet hens in horror at WikiLeaks’ release of a (ludicrously) classified list of world locations of strategic interest to the United States. Can we ever be safe now that the terrorists know there are vast mineral reserves in Central Africa, and that the Strait of Gibraltar is a vital shipping lane? Ambrose Bierce said that war is God’s way of teaching geography to Americans, but have we become so infantilized that grade-school factoids must be guarded as state secrets?

Outing the hawkish liberals and war apologists who'd have Private First Class Manning's head, Madar provides a wide-angle, big-picture sketch of the Manning saga, and lays bare the threat the soldier's conviction poses to the future of American journalism.

Visit The Nation to read the article in full.