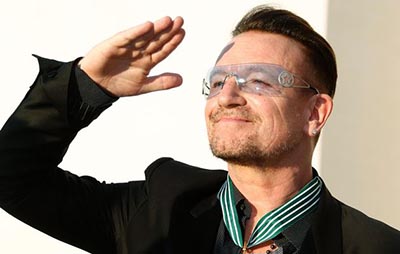 In her review of Harry Browne's The Frontman for CounterPunchRosita Sweetman charts the steady swelling of Bono's ego and coffers as he became the poster child for neoliberalism. She also wonders why the Irish media has been so hesitant to answer the charges brought up by Browne:

To show just how far Bono (and Paul McGuinness’s) power reaches not one newspaper of quality in Ireland has seriously addressed the issues raised in ‘The Frontman’, instead attempts to rubbish it have been everywhere, with one senior journalist dismissing it as ‘just a bunch of newspaper clippings’.

Interested Irish have had to search the web to find intelligent critiques; a bizarre situation indeed.

Still, the facts assembled by Harry Browne in ‘The Frontman’, cannot be so easily schmoozed:  Bono has spent his life becoming filthy rich (grand); he now uses his rock and roll celebrity status to gain access to, and sprinkle some rock and roll gold dust on ‘the suits’ in power (not so grand), and preaches aid, and AIDS, in the company of some really nasty, right wing tax dodgers, while tax avoiding and asset accumulating with the best of them (not very grand at all).

Visit CounterPunch to read the article in full.