"No guarantees without control," Angela Merkel

In a recent article in the London Review of Books, Susan Watkins - through a reading of several recently published texts - gives a critique of the Troika's hegemony over the European single currency:

Seen from the besieged parliaments of Athens and Madrid, from the shuttered shops and boarded-up homes in Lisbon and Dublin, the single currency has turned into a monetary choke-lead, forcing a swathe of economies – more than half the Eurozone's population – into perpetual recession. 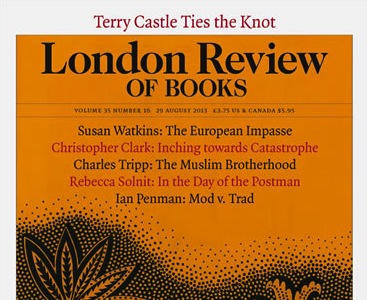 Watkins argues that the single currency is the very factor catalyzing such economic turmoil:

The result, as the vanity of the leading continental powers combined with the venality of the smaller ones, was a heterogeneous group of 17 economies, with divergent dynamics, tied to a uniform exchange rate and enjoying a shared credit rating. Rather than helping them converge, the common currency exacerbated the underlying differences between them.

The blame for such turmoil is then placed in the hands of a Germany dominated Troika:

The EU that has emerged from this epic battle is significantly more autocratic, German-dominated and right-wing... it has lurched into a new phase of unification, characterised by the same skewed mix of centripetal and centrifugal logic that has shaped its course since Maastricht: asymmetrical integration, combined with inegalitarian enlargement...The Troika – it has no official name – was scrambled together in April 2010 to take over direction of the Greek economy, as the condition for its first EFSF... The Troika's record of economic management has been abysmal. Greek GDP was forecast to fall by 5 per cent from 2009 to 2012; it dropped by 17 per cent and is still falling. Unemployment was supposed to peak at 15 per cent in 2012; it passed 25 per cent and is still rising.

Further rounds of cuts are scheduled for 2013, without any economic rationale. Another 15,000 public sector workers have to be sacked to meet the requirements of this summer's quarterly review; the entire staff of the Greek broadcasting corporation has been dismissed. The number of doctors by headcount must fall by another 10 per cent this year, as in 2012; hospital costs are to be cut by another 5 per cent, after 8 per cent in 2012, and the Troika wants to see a substantial further reduction in hospital beds.

The Troika is also shown to engender a democratic deficit:

The new powers of the European Commission and the Troika mark a real diminution of democratic control. Before the crisis, the EU had left major decisions on taxation, pensions, unemployment pay, public spending, health and education in the hands of national governments, considering them sensitive enough to require parliamentary legitimation. Now they are effectively subject to the diktat of EU functionaries.

And the democratic deficit created is then shown to be all the more of an injustice by the lack of an original public mandate for its actions:

The constitutional niceties have been preserved, so far, in that parliamentary majorities have been found to vote the emergency measures through. But in countries where unemployment and economic misery are running high, the MPs are supported by a minority of voters. In Greece, barely 30 per cent of the total electorate cast a vote for the winning New Democracy-Pasok-Dimar coalition in June 2012; those who did so were mostly pensioners and rural voters, worried for their savings, while in the big cities and among under-55s, a majority voted for the anti-Memorandum Syriza. In Spain, the governing People's Party is down to 23 per cent in the polls, the centre left Socialists even lower, and Madrid's budget strictures are fiercely contested by Catalonia. In Italy more than half the voters opted for Eurosceptic parties in February 2013 and Mario Monti, the EU establishment favourite, crashed out with 10 per cent.

Watkins asks finally "Is electoral democracy compatible with the type of economic policies the EU – backed at a distance by Washington and Wall Street – wants to impose? This is the question posed by the Cologne-based sociologist Wolfgang Streeck".

Streeck, a regular contributor to the New Left Review, is hailed as a "thinker who is provoking debate in Germany" through his new book Gekaufte Zeit:

Streeck argues that since Western economic growth rates began falling in the 1970s, it has been increasingly hard for politicians to square the requirements of profitability and electoral success; attempts to do so ('buying time') have resulted in public spending deficits and private debt. The crisis has brought the conflict of interests between the financial markets and the popular will to a head: investors drive up bond yields at the 'risk' of an election. The outcome in Europe will be either one or the other, capitalist or democratic, Streeck argues; given the balance of forces, the former appears most likely to prevail. Citizens will have nothing at their disposal but words – and cobblestones.

Gekaufte Zeit will be published as Buying Time in English by Verso for the first time next year.

Watkins' description of Streeck is representative of his wider recent writing on Europe that has appeared in the New Left Review. In "Citizens as Costumers" (NLR 76) he explains how Post-Fordist capitalism has transformed consumers' expectations, offering limitless diversification of commodities, and the implications for a public sphere which cannot hope to match the cornucopia of the market. In "Markets as Peoples" (NLR 73) he explores how today's Euro-turmoil is an amplification of the clash between popular and financial interests, the turns of the dialectic of democracy and capitalism, and possible escape routes from the dictatorship of capital markets.

New Left Review 73 also features a symposium on Perry Anderson's recent book on Europe The New Old World, including essays on the book by Phillipe Schmitter, Alain Supiot and Jan-Werner Muller. These are followed by a reply from Anderson himself. The stated aim of the symposium is to, "broaden the debate on the nature of the institutional tensions within the Union, and the historical background to them." As the introduction puts it:

The zone that only yesterday was congratulating itself on combining prosperity, civility and democracy in a synthesis no other region on earth could match, has become a danger to the global stability of capital, watched not with envy but with anxiety by its partners and rivals in the rule of the plant.