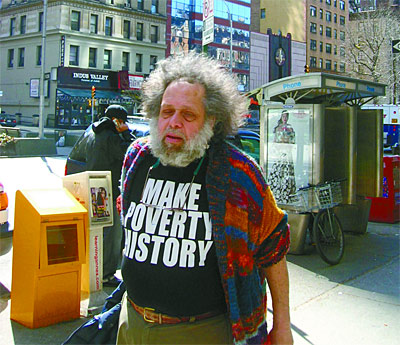 Political theorist, professor, and Verso author Marshall Berman passed away on 11 September 2013 at the age of 72.

A life long New Yorker and analytical and humanist Marxist, Berman was heavily critical of the destructive effects of modernity on New York City's urban landscape.  Yet, he remained hopeful that the conditions of modernity created possibilities for creative everyday resistance.

Berman famously articulated this optimism in his response to Perry Anderson's review of All That is Solid Melts into Air:

I think it’s an occupational hazard for intellectuals, regardless of their politics, to lose touch with the stuff and flow of everyday life. But this is a special problem for intellectuals on the Left, because we, among all political movements, take special pride in noticing people, respecting them, listening to their voices, caring about their needs, bringing them together, fighting for their freedom and happiness. (This is how we differ—or try to differ—from the world’s assorted ruling classes and their ideologues, who treat the people they rule as animals or machines or numbers or pieces on a chessboard, or who ignore their existence completely, or who dominate them all by playing them against each other, teaching them that they can be free and happy only at each other’s expense.) Intellectuals can make a special contribution to this ongoing project. If our years of study have taught us anything, we should be able to reach out further, to look and listen more closely, to see and feel beneath surfaces, to make comparisons over a wider range of space and time, to grasp hidden patterns and forces and connections, in order to show people who look and speak and think and feel differently from each other—who are oblivious to each other, or fearful of each other—that they have more in common than they think. We can contribute visions and ideas that will give people a shock of recognition, recognition of themselves and each other, that will bring their lives together. That is what we can do for solidarity and class-consciousness. But we can’t do it, we can’t generate ideas that will bind people’s lives together, if we lose contact with what those lives are like. Unless we know how to recognize people, as they look and feel and experience the world, we’ll never be able to help them recognize themselves or change the world. Reading Capital won’t help us if we don’t also know how to read the signs in the street.

Berman was also featured in New York: A Documentary Film by Ric Burns in a compelling segment that applied his thinking on modern destruction and creative possibility to hip hop culture and graffiti in the South Bronx:

Marshall was our Manhattan Socrates: not the arch dialectician but the philosopher in and of the street, not the aggressive asker of questions but the ambler in the boulevard, the man who seeks wisdom in the agora, in the conversation of Times Square, the walker in the city, the man who died among friends.

Berman's family asks that contributions in his honor go to Dissent magazine, where he served as a long time contributor and editorial board member.

TEXTS
Marshall Berman's review of the Communist Manifesto in the Nation.