Praise for Óscar Martínez's Journey Along the Migrant Trail

The Beast, Óscar Martínez's report on the horrific conditions faced by Central American migrants in their journey through Mexico to the United States, is devestating read, but one that refuses to give in to defeat. Recent press for the book repeatedly expresses the same two sentiments: revulsion at the horrors migrants face, and a deep respect for Martinez for traveling the migrant trail eight times in order to adequately tell their story. 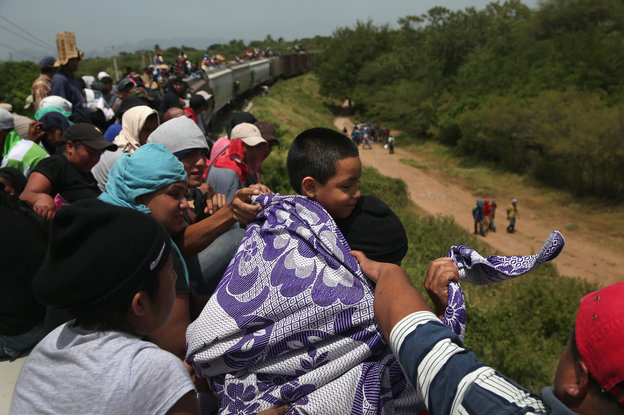 Sandra Dallas, in her review of the book for the Denver Post, applauds The Beast for its relentless detailing of the carnage along the trail, calling it a “compelling account filled with human misery."

A reviewer for the Economist commends Óscar for personally traveling the trail to fill his book with details "as vivid as they are shocking," while avoiding making the story about himself and letting "the injustice speak for itself." The Economist review concludes that The Beast transcends being a chronicle of atrocities to communicate two messages: First, that, rather than deterring migrants, efforts to tighten the border by the United States only make migrants more vulnerable to criminals. Second, that migrants who willingly face the hell that is the trail between their native countries and the United States make the decision to do so “not out of choice, but out of desperate need.”

The tie between Martínez's unflinching report of the horrors along the migrant trail and the solidarity he feels for those that suffer them comes across most clearly in a recent interview conducted for NPR's show, Alt.Latino. He points out that those traveling to the United States have no illusions about the life that awaits them there; “no migrant believes that he won’t break his back in the US,” Martínez says.

In one of the most poignant moments of the interview, Martínez explains that "the beast"—the colloquial term for the freight trains to which migrants cling in their quest north—is much more than simply a train.

What is the beast? The beast is a myth in the immigrant world. The beast is one of the most intense moments of the journey of an undocumented immigrant coming in through Mexico. [...] It’s almost a family bond. You bond with people—people who will be taking care of your son, and who you will care for, people who will care for your wife, and those whose wife will take care of you. The bond with the fellow traveler, who carries a club in his hand to defend himself from the assault of which you too will be a victim. The beast is a community that moves in solidarity through the darkest crevices of Mexico. And above all, the beast is a place where migrants are at mercy to what springs up from the mountains.

Martínez also tells of deep respect he has for those who travel along the trail, their "profound grip on life," and of the powerful humanity found among those who risk their lives to bring food and water to migrants whose names they will never know.

Visit the Denver Post and the Economist to read the reviews in full. Visit NPR to listen to Martínez's interview.
Tagged
Interviews
Reviews