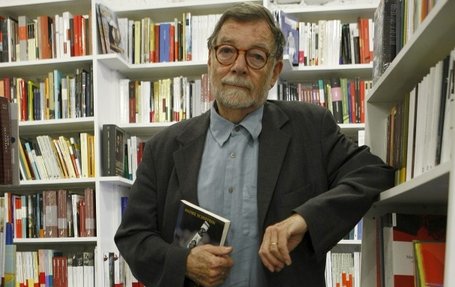 André talked me into book publishing, when most of my friends were abandoning the dying planet of print for the exciting new cosmos of the Internet. He somehow managed to suggest that publishing was both doomed and indispensable. In any case, he didn’t talk much about the book “industry”—a term he hated—when we first met. Instead, he poured out a stream of questions about The Village Voice, where I was writing and editing—who are the most interesting writers?, what are they covering?, what is she saying about labor? Then questions about the media landscape—how does this compare to what Ehrenreich had written recently? Sen? Ha Joon Cha? Then history—but what about Piven’s arguments about the ‘30s? Arrighi’s? I discovered two things the first time I talked to André. One was what he wrote about his conversations with his good friend Foucault: “Simply talking to him made me feel much more intelligent than I was.” The other is that I knew nothing.

I thought that by taking on some work at The New Press I was just going to commune with the spirit of my good friend Joe Wood. He had been my (brilliant, singular) colleague at the Voice before leaving to work with André. In 1999, Joe disappeared on Mt. Rainier. After a fruitless week searching for him on the mountain, I came home, wrote a send-off in the paper, and took a call from André. What about these orphan books of Joe’s? Hard to resist, even as it was discomfiting, though also oddly comforting, to sit at Joe’s desk, review his notes, complete his edits. Although I was still full-time at the newspaper, it soon became apparent that André wasn’t thinking of this as a temporary arrangement. When I protested that I was completely ignorant about book publishing (and not very interested), he just smiled and said, “No worries, you’ll get the hang of it in five years."

His long-view faith was even more impressive as he was a worrier. Often when I ambled over to his desk I would find him poring over sales reports, looking miserable. Still, he gently guided me as I talked with writers and artists in Cape Town and London about a book idea—a design-heavy, large-format photograph-driven book about the structural blindnesses of the truth and reconciliation process in post-apartheid South Africa, led by incisive, detailed essays by black radical intellectuals. Only after congratulating me on my first acquisition did he mention, in passing, that as a sales proposition, the book was, you know, “hopeless.”

He was certainly the most erudite person I knew, and—to my second-generation immigrant’s eyes—so patrician-metropolitan he sometimes seemed to me like a character from an Iris Murdoch novel. His elegant mumble was so faint I sometimes found myself translating for lunch mates sitting right across from him in a crowded bistro, as if he were speaking Latin. But the thing that sticks with me about him was his infectious openness—actually, relentless demand—for new ideas. Always he asked, Who are the new voices? What are the new ideas? What’s new? And he made you think the ideas could bubble up anywhere. One day I met him uptown, and he said he had been walking through Harlem and had come upon a political meeting. So he went in, talked to a bunch of folks, exchanged some ideas with a postal worker, was reminded that we really should publish a political history of the post office, perhaps an oral history of this seemingly boring agency that was actually a longtime pioneer in desegregation and a locus of debate about the public sphere, etc.

I always say that when I’m André’s age, I hope I’m half as radical as him, or, to end with another of his favorite words, I hope to have some measure of his receptivity and kindness while striving to avoid all things “anodyne.” He is my hero.