In this new blog series we bring you recommended reading lists as selected by our authors. First up, Arun Kundnani picks the 5 books on political policing that informed his writing in The Muslims Are Coming! Islamophobia, Extremism and the Domestic War on Terror. 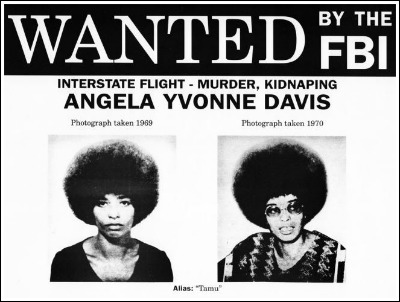 1. If They Come in the Morning: Voices of Resistance by Angela Y. Davis, Ruchell Magee, the Soledad Brothers, and Other Political Prisoners (Orbach and Chambers, 1971)

If They Come in the Morning is a classic of prison literature, equally relevant in the era of the War on Terror (though it has long been out of print). “Political repression in the United States has reached monstrous proportions,” note the authors in their opening sentence. Most of the contributions, including Davis’ own, were written from behind bars. Anticipating more recent interest in the “state of exception,” Davis is here already making links between Carl Schmitt’s Nazi legal theory and the criminalization of radicalism in the US. And before the FBI’s Cointel program had been exposed, she was clear that the Black Panthers were “victims of an official, nation-wide conspiracy to destroy their party.” James Baldwin writes to Davis of his hope that “by this hour, the very sight of chains on Black flesh, or the very sight of chains, would be so intolerable a sight for the American people, and so unbearable a memory, that they would themselves spontaneously rise up and strike off the manacles. But, no, they appear to glory in their chains.” Baldwin concludes his letter with the formula of solidarity: “we must fight for your life as though it were own own - which it is … If they take you in the morning, they will be coming for us that night.”

Professionally, Hillyard is a criminologist but his work turns the discipline upside down; his interest is not the regular criminal but the state and the injuries it inflicts. Suspect Community appeared as the British legal system was forced to acknowledge miscarriages of justice in cases - such as the Guildford Four and Birmingham Six - where the police had framed innocent Irish men and women for the IRA bombings of the 1970s. What Hillyard documents is the way police used interrogations to identify associates of suspects and so constructed a picture of the “community” as a network of suspicious persons. Through being subjected to these interrogations, those targeted also came to understand themselves as a community with a shared experience of suspicion. Hillyard’s point is that policing practices were integral to the social construction of the Irish as a racialized group in Britain. The community is constituted through the interrogation process; it is forged in the police cells. The argument remains valid as an account of how surveillance and racialization are intertwined in the War on Terror.

3. Policing America’s Empire: The United States, the Philippines, and the Rise of the Surveillance State by Alfred W. McCoy (University of Wisconsin Press, 2009)

Dig into the institutional histories of agencies established to protect “national security” and a period of colonialism is often revealed as formative. In Britain, the police’s counter-terrorist units began life at the end of the nineteenth century as the Special Irish Branch, established to counter opposition to British colonialism in Ireland. McCoy demonstrates that the US national security apparatus had its origins in colonial Manila at the beginning of the twentieth century. US colonialism in the Philippines was a laboratory for testing techniques of repression: compiling dossiers on the private lives of nationalist militants, spreading disinformation in the media, and planting agent provocateurs. Control over information proved as effective a tool of colonial power as physical force. During World War One, McCoy writes, these methods “migrated homeward to provide both precedents and personnel for the establishment of a US internal security apparatus. … After years of pacifying an overseas empire where race was the frame for perception and action, colonial veterans came home to turn the same lens on America, seeing its ethnic communities not as fellow citizens but as internal colonies requiring coercive controls.”

4. On Terrorism and the State: the Theory and Practice of Terrorism Divulged for the First Time by Gianfranco Sanguinetti (B.M. Chronos, 1982)

Conspiracy theorists speak of “false flag” operations, spectacular acts of terrorism covertly perpetrated by the state to legitimize repression. Almost without exception, their claims lack any substance. But in Italy in the 1970s, the secret state, with NATO backing, did indeed foster its own right-wing terror cells and enable them to carry out terrorist outrages that were presented to the public as stemming from left-wing radicalism. In the face of one of Europe’s strongest and most radical working-class movements, the status quo was preserved by destabilizing democracy itself. Emergency “anti-terrorism” powers were introduced to undermine the Left, while the state presented itself as a neutral mediator between opposti estremismi (“opposing extremisms”) of Left and Right. The situationist writer Sanguinetti was onto this long before anyone else, writing in his self-published 1979 pamphlet that in the name of a “sacrosanct defence against the terrorist monster,” the state “can exact from all its subjects a further portion of their tiny freedom, which will reinforce police control over the entire population.” In this “strategy of tension,” all other political questions were forgotten in the face of the “holy mission” of securing public order against extremism. The details of his argument are specific to the Italian context but his general observations on the spectacle of terrorism apply as much to our own times.

5. The World That Never Was: A True Story of Dreamers, Schemers, Anarchists, and Secret Agents by Alex Butterworth (Vintage Books, 2011)

The first international “War on Terror” began with the anarchist bombers and assassins of the late nineteenth century. In response to a wave of assassinations of political leaders and European royalty, police forces developed techniques of infiltration, provocation, and inter-agency co-operation. In Russia, the Okhrana, a secret police force formed in response to a series of attempts to assassinate the tsar, perfected the use of informants and agent provocateurs. The agency’s innovative filing system, in which cards were held on half a million Russians, cross-referenced with political friends, non-political acquaintances, and persons in contact with friends of the suspect but not known to him personally, remains the basis of modern intelligence gathering. The tactic of individual acts of spectacular violence against Europe’s ruling elite was triggered by the Versaillais troops’ violent suppression of the Paris Commune of 1871. Many of the bombers were veterans of the Bloody Week when tens of thousands of communards were slaughtered. Butterworth’s book brings to life the murky characters who peopled the clandestine worlds of anarchist groupings and their police foes. He is brilliant at highlighting the subtle ways in which each overlapped and mirrored the other; Russian revolutionaries grew as expert in compiling dossiers on police spies and infiltrating the state as their opponents were at doing the same to them.

Arun Kundnani is the author of The Muslims Are Coming! Islamophobia, Extremism and the Domestic War on Terror.