Former Tory MP Caroline Spelman has called for the UK to follow the 'Nordic model' on sex trade legislation (criminalising the purchase of sex and not the sex worker), and urged more male politicians to enter the public debate about the reform of prostitution laws. Do we really need to hear from more people who have never worked in the sex trade? In particular, more male politicians? Both Caroline Spelman and Mary Honeyball are doing a good enough job at not representing sex workers, and their basic human rights to work free from danger, as it is. 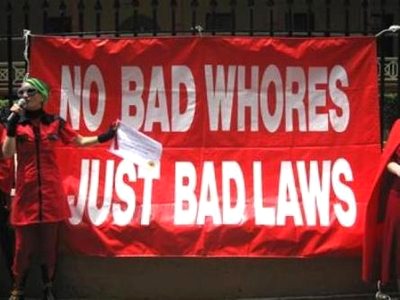 In response, Melissa Gira Grant (author of Playing the Whore: the Work of Sex Work), wrote this piece for the Guardian:

The vast majority of people who wish to prohibit prostitution through the rule of law have never sold sex, and the most vocal and informed majority of those who oppose anti-sex work laws are sex workers. In a society that truly valued the dignity and rights of sex workers, this would be enough, and such laws would be illegitimate.

They know this, the anti-sex work campaigners who support the use of police surveillance, arrests, public shaming, fines and incarceration to bring about the end of the sex trade. Now they appeal to what they believe is a moral high ground: they don't revile sex work and sex workers; they only want to protect women, though it's not only women who sell sex.

The European Women's Lobby, their MP allies, such as Spelman, and various anti-prostitution charities, have sensed correctly that criminalisation does not sound to most people like the kind of "protecting women" agenda they claim to support. So they have turned to a set of anti-prostitution laws adopted in Sweden and Norway, now termed "the Nordic model" and rebranded criminalisation as compassion. These laws, they say, will only apply to men who buy sex, and will help women out of the sex trade. But nowhere do these laws function as advertised.

Though Sweden's anti-prostitution law is typically celebrated as a means of "ending demand" for commercial sex, it's proven to do no such thing. No meaningful data exists on the size and scope of Sweden's sex trade before their anti-prostitution law was adopted in 1999, and according to Swedish law enforcement, some sectors of the sex trade may even be expanding.

In Norway, also heralded as a success story by anti-sex work advocates, sex workers have faced evictions from their homes and working flats under Operation Homeless. This March, when three Nigerian sex workers in Norway were assaulted in their motel by men posing as customers, they sought help from the police – who then had the women deported.

Criminal laws against commercial sex – like those in Sweden and Norway, as well as the United States – do not protect sex workers, and in reality, these laws expose them to violence. This is why they are opposed by Human Rights Watch, by the United Nation's Global Commission on HIV and the Law, and World Health Organisation. Amnesty International has proposed a policy supporting the full decriminalisation of sex work as a means of ensuring sex workers' human rights and, earlier this month, their UK membership voted to reject the Swedish-style criminalisation of sex work.

But most critically, it's the people most likely to face the consequences of these laws who oppose them: women who currently sell sex. Without their direction and expertise, not only will these debates over their own lives be meaningless, but they will also be very dangerous.

You can read the piece online here, including Joan Smith's opposing argument.

Melissa Gira Grant is the author of Playing the Whore: the Work of Sex Work