40% off EVERYTHING!
about 1 month left
Madison Van Oort
comments

Launching a Social Movements Summer with They Can't Represent Us! authors Marina Sitrin and Dario Azzellini 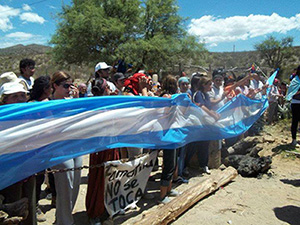 In their forthcoming book, They Can't Represent Us!: Reinventing Democracy from Greece to Occupy, Marina Sitrin and Dario Azzellini explore recent social movements that have sprung up around the globe. As the revolutionary horizons of Occupy Wall Street have again faded to a muted reformism, the stories of bravery, cooperation, and action in these movements are needed now more than ever.

As part of the launch for the book, Sitrin wrote for OpenDemocracy about some of the noteworthy engagements with direct democracy in Argentina, where people are fighting against capitalism and transforming their relationships to each other—and themselves in the process. From La Rioja to Cordoba, people are working together to "defend what they hold in common," resisting everything from mountaintop mining to Monsanto's toxic seed treatments.

In La Rioja, those involved in the movement say that "the struggle to defend La Famatina is forever." What began as a defense of the mountain, earth and water has evolved into a new space of creation. On the road blockades, for example, people are organizing to bring food, cook together, arrange medical support, and entertain themselves through music, dance and storytelling ... Personal transformation has become one of the most important aspects of the political changes that are taking place. The political is made personal, and the personal is made political in return.

In addition to Sitrin's insightful article, there are numerous oppportunities to catch the They Can't Represent Us! authors in person, which we've rounded up below.

If you can't make it to the party, the authors will appear on a number of panels on Saturday. At 10:00am in Room L.76, Azzellini will discuss what everyday revolutions look like. Next, at 12:00pm in room L2.84, Sitrin will join David Harvey and others in looking at contemporary movements, uprisings, everyday revolutions, and the contradictions of capital to discuss the state of anti-capitalism and the political imagination today. Finally, in Room 1.224 at 5:00pm, Azzellini will ponder the complexities and possibilities of post-Chavez Venezuela.