On 27 March 2014, Verso author and political philosopher Chantal Mouffe gave a lecture at Columbia on some themes from her latest book Agonistics: Thinking the World Politically, highlighting the value of political conflict in reshaping the institutions of liberal democracy. 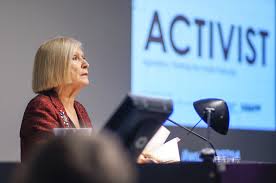 After an introduction to the theoretical aspects of agonistics, Mouffe delved into concrete examples. She expressed concern for the type of anti-institutional strategies that the indignados in Spain and the various forms of Occupy have adopted:

They share a total rejection of representative democracy. Moreover, they also believe in the possibility for social movement on their own. To bring about a new type of society where a so-called real democracy could exist without need for the state or any form of political institution. Well, I'm afraid that without any institutional relay, they will not be able to bring about any significant changes in the structure of power.

Instead of the "power to the people" interpretation, she argues that the recent protests instead reflect a crisis of representation, a consequence of the consensus at the center that has come to dominate politics in most liberal democractic societies.

Watch the lecture in full below.