40% off EVERYTHING!
about 1 month left
Christine Chong
comments

What does neoliberalism have in common with Lacanian anxiety? Much more than you may think, says Japhy Wilson, author of Jeffrey Sachs: The Strange Case of Dr. Shock and Mr. Aid: 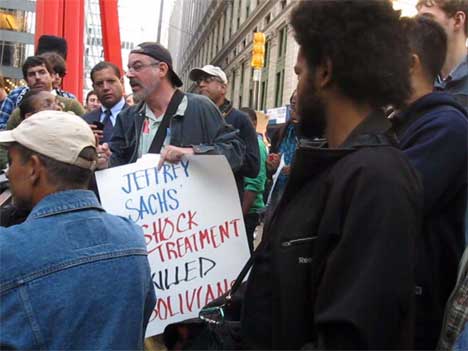 Image from The Internationalist

Neoliberalism should be interpreted as an anxiety-ridden form of crisis management that is constantly attempting to cover over the gaps and ruptures in its own ideological fabric caused by the contradictions that it is structured to conceal. According to the psychoanalytic theory of Jacques Lacan, anxiety is caused not by the fear of separation from an object of desire, but by the overwhelming proximity of that object in the Real.

In "The Economics of Anxiety: Neoliberalism as Obsessional Neurosis," his recent OpEd for OpenDemocracy, Wilson reconceptualizes neoliberal ideology as an anxious social fantasy structured against the Real of Capital. A form of obsessive neurosis, neoliberalism’s "resilience and transformability" are in fact frenetic attempts to cover over the gaps in its ideological fabric and prevent anything Real from happening.

Michael Busch: Can you begin by giving a little background about the idea animating the Counterblast series? Where does it come from? Why the “pamphlet” model?  And why now?

Audrea Lim: The idea behind the Counterblast series is to target (and take down!) prominent liberal figures who profess to be progressive, while actually pushing neoliberal solutions. … [they] represent the failure of mainstream, liberal discourse to offer real solutions to political problems, and this is what the series is meant to highlight.

The tradition of polemical pamphleteering has animated revolutions historically and globally, from the Seventeenth Century Levellers to the French, Russian, Chinese and Cuban revolutions of the Twentieth Century (not to mention the Arab Spring uprisings, Occupy and anti-austerity movements across Europe, more recently) … the Counterblast books are meant to destroy any illusions that humanitarian intervention or market-based solutions, for instance, might actually work this time around.

Visit Opendemocracy to read the article in full.

Visit Warscapes to read the interview with Audrea in full.