40% off EVERYTHING!
about 1 month left
Japhy Wilson
comments

In this new blog series we bring you recommended reading lists as selected by Verso authors. Our next installment comes from Japhy Wilson, author of Jeffrey Sachs: The Strange Case of Dr Shock and Mr Aid, offering up his picks of the best reads on neoliberal fantasy. 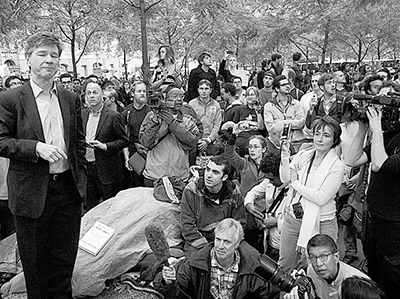 In Jeffrey Sachs: The Strange Case of Dr Shock and Mr Aid, I develop a critique of neoliberalism as an anxious form of crisis management, which evolves through its failures to conceal a repressed truth. Neoliberal ideology, I argue, is not a monolithic shock doctrine, but a web of social fantasies structured against the traumatic Real of Capital. Here I introduce some of the books that have influenced my understanding of the neoliberal project, and its perplexing trajectory from the austere brutality of shock therapy to the messianic spectacles of philanthrocapitalism.

Countless books have been written on the nature of neoliberalism. In my opinion, this one is the best of the lot. Much of the critical literature on neoliberalism presents it as omnipotent and one-dimensional – as a hegemonic class project or a mysterious deus ex-machina that relentlessly hollows out the state and marketizes all forms of social existence. Peck distances himself from such representations, providing a detailed and nuanced genealogy of neoliberalism, which emphasises its diverse sources, its internal incoherence, and its ceaseless transformation in response to repeated crises. Peck distinguishes two phases of the neoliberal project: first there was the ‘roll back neoliberalism’ of Thatcherism, Reaganomics, shock therapy, and the Washington Consensus, which sought to roll back the interventionist state and allow market society to spontaneously flourish. When this failed to achieve the desired results, it was replaced by ‘roll-out neoliberalism’, which aimed to compensate for the multiple ‘market failures’ of the roll-back phase, through the rolling out of an increasingly comprehensive set of social reforms and institutional modifications that remained faithful to neoliberal fundamentals. Hence the Post-Washington Consensus of the World Bank, the Third Way of the Blair and Clinton era, as well as numerous subsequent iterations of the roll-back/roll-out dialectic. Peck therefore insists that “it is necessary to recognize the free-market project’s adaptive (and co-optive) capacities, rather than relying on cartoon-like versions of its supposedly invariant essence’ (p. 276). This argument helped me to understand Jeffrey Sachs’s transformation from Dr Shock into Mr Aid, not as a ‘road to Damascus’ rejection of neoliberalism, but as a transition that remained internal to the trajectory of neoliberalism itself.

This was Žižek’s first book in English, and it remains his best. The book presents a radical reformulation of the critique of ideology, drawing on the psychoanalytic theory of Jacques Lacan. Against orthodox Marxist understandings of ideology as the projection of an illusory appearance onto an external reality, Žižek argues that ideology should be understood as a web of social fantasies, which unconsciously structures social reality itself against the traumatic Real of its constitutive antagonisms. This led me to an understanding of neoliberal ideology as a social fantasy, which frames social reality to exclude the Real of Capital. Žižek argues that such fantasies are always haunted by the Real that they deny, and are forced to continually reconstitute themselves in order to explain away the proliferating symptoms of their repressed truth. This account of ideology helps to explain the evolution of the neoliberal project, which endlessly invents new theoretical innovations and social interventions in order to sustain its fundamental ideological coordinates against the relentless manifestations of the contradictions of capitalism. Žižek’s book also helped me to understand Jeffrey Sachs’s own personal transformation from Dr Shock into Mr Aid. Sachs’s neoliberal fantasy was shattered by the catastrophic failure of his shock therapy experiment in Russia, which confronted him with the ugliness and brutality of the Real of Capital. His subsequent transformation can be understood as a series of displacement activities to conceal the symptoms of this confrontation. Like the obsessional neurotic described by Žižek, Sachs “builds up a whole system enabling him to postpone the encounter with the Real ad infinitum” (p. 192).

In this dense and challenging work, Postone presents a reconceptualisation of Marx’s critique of political economy, which forces us to rethink the nature of domination in capitalist society. Postone acknowledges the elements of domination typically identified by Marxist critique – exploitation, dispossession, and the politics of making the poor pay the costs of economic crises. But he identifies a further dimension that incorporates and exceeds them all: capital itself as an abstract form of domination, which drives beyond all social and ecological boundaries, and transcends all forms of political control. Capitalist accumulation generates a uniquely self-reinforcing cycle of endless growth, which imposes itself as the monolithic imperative of capitalist society. As such, it appears as a force of nature – ‘the law of the market’; ‘the power of money’ – despite the fact that it is really the alienated product of our own labour. To go beyond capitalism therefore implies the transformation, not only of class relations, but also of the entire system of production that generates capital as an abstract form of domination – a transformation that ‘actually-existing socialism’ failed to achieve. This reconceptualisation of capitalism has informed my understanding the Real of Capital as the traumatic dimension excluded from the neoliberal fantasy. From this perspective, the fantasy of the invisible hand of the market is not a mere fiction, but is a disavowed representation of what Postone describes as “The capital form of social relations as an alien, abstract, self-moving Other, characterised by a constant directional movement with no external goal” (p. 278). This was the monstrous, terrifying dimension of capital that Jeffrey Sachs had excluded from his symbolic universe, and that suddenly confronted him in Russia.

The Tragedy of Russia’s Reforms is the definitive account of shock therapy in Russia. It is also one of the most powerful critiques of free market capitalism ever written. Reddaway and Glinski present a meticulously detailed account of Russia’s transition, charting the decline of the Soviet Union in the 1980s, the formulation and implementation of shock therapy in Russia in the early 1990s, and the crisis that engulfed the country for the remainder of that decade. The book is a study of what happens when an abstract economic model is implemented in an extraordinarily complex and volatile social context, without any attempt to take the peculiarities of that context into account, or to establish the necessary institutional architecture to manage and regulate the transformation. The model in question was a stripped down macroeconomic agenda of mass privatization, wholesale liberalization, and the widespread abolition of price controls. The outcome was an economic and social crisis even more profound than the Great Depression in the USA: hyperinflation, the destruction of real wages, the collapse of industrial and agricultural production, and dramatic increases in poverty and inequality, while the social wealth of the nation was emptied into the hands of the notorious oligarchs. Jeffrey Sachs emerges as a key figure in the dramatis personae of the book, as the most prominent and zealous member of a team of Western advisors to Boris Yeltsin, who “apparently believed that the fast implementation of Reaganesque capitalist rules of the game could be accomplished in Russia by peaceful and democratic means, without regard for national values, traditions, and culture” (p. 242). This account of Sachs’s role in relation to the broader Russian context was very useful to me in trying to make sense of his subsequent disavowal of responsibility for the crisis. It also helped me to grasp the nature and scale of the crisis itself, which shattered Sachs’s neoliberal fantasy, confronting him with the Real of Capital in the form of brutal class relations, violent state repression, and capital itself as a destructive force exceeding the bounds of political control, and tearing society apart with a seemingly all-consuming fury.

One of the most peculiar permutations of neoliberalism in recent years has been the emergence of a nexus of billionaire philanthropy, corporate social responsibility and cause-related marketing under the ideological banner of ‘philanthrocapitalism’. Brand Aid provides an important critique of this phenomenon. It focuses on the case of Bono’s Product Red campaign, in which iconic global consumer brands donate a percentage of their profits from designated ‘Red’ items to supply anti-retroviral treatment to HIV/AIDS suffers in sub-Saharan Africa. Richey and Ponte show how Product Red – and philanthrocapitalism more generally – functions to legitimate the economic system that is at the root of the problems that it claims to be addressing. They argue that the purchase of commodities replaces genuine political engagement, while neo-colonial representations of African helplessness and deprivation replace critical interrogation of the causes of global poverty and inequality. Once the target of the so called ‘anti-globalization movement’, multinational corporations are now presented as the agents of progressive change, and their brand identities are intertwined with the saving of African lives. Philanthrocapitalism has thus “found a way to generate capitalist value from those whose physical and economic abjection places them completely outside of capitalist reproduction” (p. 17). Despite the apparent incongruity between this story and the case of shock therapy in Russia, Jeffrey Sachs once again appears in a leading role – as the economic guru who inspired Bono’s vision of the world, and as the driving force behind the Millennium Villages Project (MVP), which Richey and Ponte identify as a further example of philanthrocapitalism. Their analysis helped me to decipher the continuities of neoliberalism beneath its weird ideological shape-shifting, and provided further evidence of the constant, neurotic compulsion of Jeffrey Sachs and others like him to sustain their social fantasy against the unbearable pressure of the Real of Capital.