The Front National: what kind of people are they? By Luc Boltanski and Arnaud Esquerre

Xenophobia Blog Series. This is the first instalment of a series of pieces published on our blog by leading voices on the current and alarming force of Xenophobia - the fear of "strange and foreign" identities. 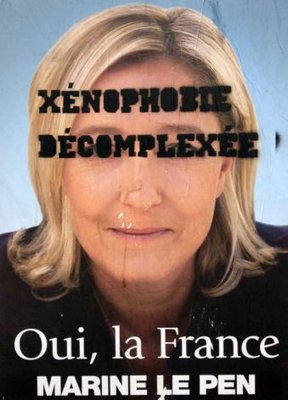 The terrible results of the European elections were not a crash of thunder in a calm sky. They are a particularly worrying step in a downward spiral that has accelerated in recent months. The Front National is, certainly, the most troubling political beneficiary of this. But it also owes its success to shifts toward reactionary themes that have gradually been changing the media landscape and the atmosphere of the intellectual world.

This downward spiral has taken us into an exceptional political situation to which no one can close their eyes, where all initiative belongs to a right wing driven to the extreme, whipping up a panic that has not spared the Left, either. In this context, the extreme right has managed to reoccupy two strategic positions long divided between Left and Right, the association of which enjoyed its high point in the 1930s. On the one hand, its chosen terrains of ultra-conservatism and xenophobia; on the other hand, its supposedly 'radical' critique directed against neoliberalism, invoking state intervention in the name of the defense of the people. The association of these two themes is the basis of its rejection of Europe, as identified with its institutions in Brussels, drawing an inextricable link between the closing of borders against the 'migrant invasion' and its 'economic patriotism' in the name of the people. To stand up for the people oppressed by the powerful – in this supposedly critical discourse – represents the mobilising theme par excellence. However, in this case the political intelligence of the extreme right consists of its remodelling the classic theme of exploitation, which served as the basis for the workers' movement, reorienting it by reference to another figure whose demeanour is less sullied by Marxism, namely the theme of representation. The 'true people of France' has, they say, been thrown onto the scrapheap by the bien-pensant left, that is to say, the bourgeois bohemians who have promoted a new 'dangerous class' composed of a mass of foreigners, riff raff and minorities lacking in any morals, particularly as regards their sexual orientation and conduct.

Indeed, in this right-wing turn, 'morality' is constantly invoked. It takes the form of decency, respect, courtesy, gallantry, and, above all, politeness, all these virtues that come naturally to the 'good people' who put them to use in the course of everyday lives. These people are grounded in their innate sense of the limits that all human life must respect when it really takes accounts of the unsurpassable attachments that flow from one's belonging to a sex, a nation, a homeland, a family, a tradition – in brief, everything that 'we are like here'. But without doubt this rediscovery of morality – understood in terms of politeness – would not have managed to get such a hearing if it had not benefited from its association with another theme that played a greater role in the extreme right's argumentation, namely that of insecurity. And this works thanks to the intervention of the association between politeness and civility. One of the characteristic traits of this moralising discourse is that it is founded on nothing other than common sense, as is expressed in particular during the demonstrations against equal marriage rights and 'gender theory'. Through a sort of tautology, what these people are attached to is held to be moral, and this people is really a people because it is attached to things that are the source of 'values', thus meriting everyone's respect. The theme of identity has itself come to centre stage in the course of the last decade, and not only thanks to the political advance of the extreme right, but also within the classic right, and so, too, in the intellectual world. It is particularly worrying given that it is associated with a rise in xenophobia. 'Immigrants' are supposedly invading France. Under accusation as presumed Muslims, their expansive presence supposedly endangers the 'luckless, ill-treated' identity of the Nation, the vector of a 'great substitution' marking the weakening of 'our' civilisation under the blows of Islamism.

This defence of a people oppressed simultaneously by the rich and by the 'foreigners in our midst' is not itself anything new. Since the end of the nineteenth century it has represented the historical platform and almost the raison d'être of the nationalist right, as well as being one of the most fertile supports for anti-Semitism. So it is none too surprising to see an identification that was once at the centre of the ideology of Action Française and, more generally, the 'revolutionary right', now coming back into fashion – namely the identification among different species of 'parasites' – the 'upper-class profiteers', metics and Jews, all mixed up in one same entity. This of course needed a short and sharp, easily-remembered name: 'the system'.

Without doubt one of the most striking symptoms of the insecurity that accompanies great social and political crises is the awareness that we have been plunged into a world where words like 'people', 'value' or 'morality' 'don't have any sense any more' because they have 'lost their common meanings'. One of the first tasks with which intellectuals are today faced thus consists of reappropriating a language that has been subverted, and as a top priority the term 'people'. What seem to be the most abstract debates – or even the most abstruse ones – have complex relations with the political situations that surround them, such that it is often difficult to distinguish what they reflect from what they contribute to bringing about. This is what we listlessly call 'the spirit of the times'. But when this spirit takes the kind of turn that we are seeing at the moment, it becomes a matter of urgency to make it a greater object of study and critical analysis, that is, as Michel Foucault would have put it, to develop an 'ontology of actuality'.

For intellectuals, that is the most immediate way of seeking to exert influence on a political situation whose effects they themselves suffer, on account of the deleterious atmosphere enshrouding daily life in the country where they live and work, and to which they could also react in many other ways: 'as citizens', as they say.

To read the original French article in Libération click here.