Dire Necessity? An extract from Douglas Newton’s The Darkest Days: The Truth Behind Britain's Rush to War, 1914 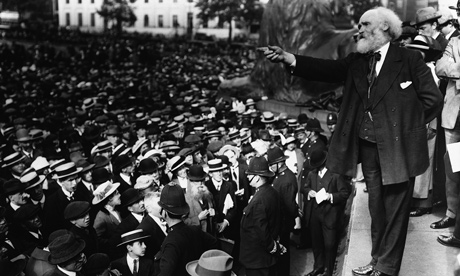 Today marks 100 years since Britain joined World War One, with ceremonies commemorating Tuesday August 4 1914 taking place across the UK. You will be hard pressed, however, to find any reportage today critically reflecting on Britain’s entry into the war, with sanctimonious and sometimes jingoistic statements made about the necessity of joining. Many recently published histories of Britain's Great War embrace the conflict as a good war—irresistible, righteous—and popular. It has become almost heretical to offer criticism of Britain's intervention. Douglas Newton’s The Darkest Days: The Truth Behind Britain's Rush to War, 1914 presents a new critical examination of the government's choice for war, and weaves into the story an account of those "radicals" and other activists who urged neutral diplomacy in 1914 (such as Keith Hardie’s Sunday 2 August address to the ‘War Against War’ rally for neutrality and peace at Trafalgar Square, documented in the above photograph). It is in this respect that Newton’s book, as he himself puts it in the introduction, ‘is meant to unsettle’. Read an extract from The Darkest Days introduction below.

This book is meant to unsettle. It attacks the comforting consensus that has emerged in contemporary history regarding the British choice for war in August 1914. According to this consensus, the story is a simple one: Britain was wholly in the right, for she did all she could to avert war. Britain’s choice for war was made on Tuesday 4 August, and was an irresistible response to the German aggression of that day – the invasion of Belgium. The choice for war was almost universally approved, and only a rump of ‘pacifists’ dissented.

In refutation, this book reveals a much more complex truth. Britain, like all the nations caught up in this tragedy, made errors. Her leaders made reckless decisions that only hastened the war, and left things undone that might have helped to avert it. Britain’s choice for war was in fact made on Sunday 2 August, before Belgium was invaded, and was driven above all by a desire to show ‘solidarity’ with France and Russia. Some at the top looked upon the moment as favourable for war, for Britain could join with two other friendly Great Powers and ensure Germany’s defeat. Turning to those activists who campaigned for Britain’s neutrality during the crisis, it is clear they had significant support, far beyond the ranks of mere ‘pacifists’. The apparent inability of Britain’s peace activists in 1914 to prevent the nation’s intervention testifies not to the futility of their cause but to the rapidity of the crisis.

The book argues that – just as the British people discovered in 2003 with regard to the decision for another war – even nations very largely in the right can make terrible mistakes in rushing into a conflict. This volume, then, is not in the heroic tradition of so many recent British histories of the First World War. It is in the tragic tradition, arguing that British errors made a significant contribution to the outbreak of the common European tragedy that was the Great War.

Over the last thirty years, it has become increasingly common for historians of Britain’s Great War to stand up for the war. This school of history can be conveniently labelled the ‘dire necessity’ school. Its argument is straightforward: the war was horrible, but for Britain and its Empire it was a ‘dire necessity’. Historians of this persuasion praise those British politicians who chose war in 1914, and are keen to revive the reputations of the British generals who directed the combat. They applaud the ‘see it through’ spirit that inspired the British national effort. They are impatient with those who opposed the choice for war, and with those historians who focus upon the cost in corpses. They tell the story of the Great War as a ‘good’ war. Authors loyal to this developing consensus openly announce their intention to challenge the grimly negative ‘popular memory’ of the Great War.

Historians of the ‘dire necessity’ school have produced valuable studies of Britain’s military effort, but they often go further than merely analysing battles, typically offering full-throated endorsements of the war. They vehemently defend the British commitment to the war: It was ‘a just war, and a necessary war’, and ‘there was no alternative’.

With great passion, these historians object in particular to any notion that the war was ‘futile’. Futility is old hat – victory shines through in its place. The big themes are the reality of victory, and the crucial contribution of British arms. The lessons that the West should take from the conflict are chiefly positive – the lessons of national resolve and readiness for sacrifice. Victory redeems the war.

Not surprisingly, historians from this new hawkish school lavish praise upon Britain’s choice for war in 1914. They are in no doubt that, as one prominent military historian concludes, Britain took ‘the right decision’, and staying out ‘would have courted national disaster’. In such circles, fatalism about the choice for war is common. History could never have been other than it was. Britain did the only thing she could do. There was no alternative to war, and the people recognised this. For example, another historian argues that British Liberal Prime Minister Herbert Asquith’s decision to intervene was ‘inevitable’ and his management of the crisis was something of a political ‘triumph’.

Of course, not all historians agree. Most notably, Niall Ferguson has dared to question the perceived wisdom of the commitment. ‘What if Britain had “stood aside” in August 1914?’ he asks, speculating about the likely course of events if Britain had not intervened – and if Germany had won. The probable evils that might have flowed from a German victory, he suggests, could scarcely have been worse than the actual evils visited upon Europe by fifty-one months of catastrophic war. Of course, nothing about what did not happen can be proven – or disproven.

Much more provocative – and inspirational for this book – has been the work of Keith Wilson. As a critic of British foreign policy, Wilson is refreshingly objective. He contends that Britain’s ‘policy of the Entente’ – the diplomatic alignment with France (in 1904) and then with Russia (in 1907) – was originally conceived as a stratagem to secure the British Empire from Russia and France, rather than as a far-sighted plan to contain Germany. He documents the imperial obsessions that drew Britain’s decision-makers toward an ever more dangerous reliance upon the Ententes before 1914. He scorns the Liberal politicians, Prime Minister Asquith and his foreign secretary Sir Edward Grey, who declared that Britain had retained her ‘free hand’ up to 1914. He highlights how rushed, how closely contested, and how very ‘political’ was the final choice for war.

However, none of the dissenting historians has succeeded in challenging the prevailing consensus that endorses the British choice for war. All wear a social black eye for having defied the ‘dire necessity’ school.

It is important to stress that the path of speculation about Britain ‘standing aside’ in 1914 is not essential to the debate. The question ‘What if Britain had “stood aside” in 1914?’ does not really help us to understand what happened. It hypnotises and misleads. It is the simplest of questions asked of great complexities. It is the last question posing as the first. A critic of Britain’s role in 1914 does not need to go to the length of speculating about what might have happened if Britain had remained neutral at the end of the July–August crisis. Certainly, a case can be made that Britain ‘did the right thing’ on Tuesday 4 August. However, even accepting this, it is still essential to interrogate Britain’s role up to this point, and to ask what might have been done differently. Logically, Britain’s action on the last day of the diplomatic crisis cannot be assumed to vindicate all her actions over the preceding fourteen days.

A great many other ‘What if?’ questions might be asked of British actions along the twisted path from Thursday 23 July to Tuesday 4 August 1914. What if Britain’s leaders and diplomats had sought determinedly to restrain Russia? What if Grey had put both the Russian and French ambassadors in London under real pressure on the issue of Russia’s early mobilisation? What if Winston Churchill, the First Lord of the Admiralty, had not issued orders to keep the British Fleet concentrated, ready for deployment (on Sunday 26 July), a publicised initiative that heartened advocates of ‘firmness’ in Russia and France? What if Churchill had not been permitted to order the fleet to its war stations (on Tuesday 28 July), another initiative that incited hard-liners? These and a dozen other questions might be asked of British actions before Tuesday 4 August.

The historians of the ‘dire necessity’ school will have none of this. They argue that the end for which the British fought was right – the destruction of the German menace. The end was so shiningly right that the means scarcely merit close inspection. Any ‘forcing the pace’ on the Entente side is forgiven as prudent ‘preparedness’. This keeps our understanding of the crisis in a state of perpetual adolescence.

At the heart of this book is the belief that the war was not irresistible. The improbable can still rule in history. Fatalism, driven by knowledge of the outcome, blights many narratives of the crisis from the British perspective. It needs to be challenged. The purpose of this book is to re-examine the events of July–August 1914 in Britain, from the perspective of both those choosing war and those resisting it. It aims to reconsider both the British choice for war and the campaign waged for neutrality at the time by ‘Radicals’, as those on the progressive wing of the Liberal Party proudly called themselves in those days. It rejects the common assumptions that history could not have been otherwise and that Britain was bound to embark upon war on Tuesday 4 August. It accepts that Britain suffered from many of the same destructive forces in her politics and society as could be discerned in other nations. Europe was sick – and Britain was not free from the infections that disabled and disoriented others.

Disappointing as it is to the convinced moralists, there is no ‘one true cause’ to be discovered in this or other narratives of the July– August crisis. When the plague is upon all houses, as it was, it is only right to explore each house in that spirit. That is the spirit motivating this book. Britain is the house under examination here. Britain was not especially to blame – but neither was she free of blame – when in 1914 the tragedy of war engulfed a rotten system.