Laura Oldfield Ford analyses the increasing reversal of the suburb and the inner city for a text to accompany her new exhibition, Seroxat, Smirnoff, THC held at the Stanley Picker Gallery in Kingston. Laura is an artist and the writer of the acclaimed put 'n' paste zine Savage Messiah. The show will be running from 9th October to the 29th November and will be accompanied by two "drifts" around the Ballardian landscapes of suburban Surrey on Saturday 25 Oct and Wed 12 November. 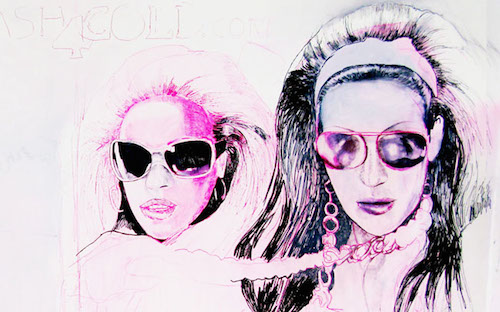 ..the suburbs are self medicating..

The suburb is the new inner city, a reversal has taken place. Once maligned areas like Brixton, Hackney and Clapham have become the chic residences of a new bouregoisie; spaces once open for experimentation and drifting have been locked down and sealed off; squatting has become illegal, being on the dole means attending endless time wasting courses constructed to please Mr and Mrs Ukip in Middle England...time has been co opted, we no longer have time to wander and dream in a city where exorbitant rents take all your wages.

The desirability of investing in a brand, London World City, of having a santised heritage industry and cultural emblems ( the last remnants of an appropriated psychogeography) means that the working class of inner city London have been pogrammed out, subjected to an intense campagin of social cleansing.

Where do we end up? Is London becoming more like Paris, with a wealthy centre and an outer circle of ravaged banlieu? In London it feels as though the inner city has shifted to the periphery.

The suburbs emerge as two distinct catergories, zones of refuge and zones of sacrifice. The zones of refuge are the sites where bankers frazzled with siphoning public money go to relax and dream of heritage England, of Tolkein, of homes and gardens. These are places like Thames Ditton and Teddington, constructed idylls where a banker can base the wife and kids while he blows his bonus in the strip clubs and drinking dens of the City.

Zones of sacrifice are the areas left to decay amidst sites of gentrification ; think of Streatham, held captive on all sides as Balham, Clapham and Tooting are swept up in the ghoulish horror of Cath Kidston and cup cake baking.

Often these areas sit side by side, Twickenham and Hounslow for example, or Windsor and Slough.

These zones of sacrifice are areas seemingly starved of investment and set aside for those who are deemed temporarily necessary to the economy but regarded as undesirable, the workforce who subsist on zero hours contracts in the service sector, the jobseekers, call cente workers, those driven to the brink of madness by payday lenders and ATOS. There are few places left to rent in London that don't exeed the housing benefit cap. The overheated south east property market, the welcoming of non domiciles, the auctioning of new developments in Singapore and Hong Kong and local authority housing policy is driving working class people out, into the zones of sacrifice, into the suburbs. Those ending up in the fraying edges of Edmonton, Barking and Slough are the lucky ones, others get decanted to the north, to the vast zones of sacrifice up there, like Bradford.

These suburbs are the new transient zones, where architecture is provisional and lanes behind rows of semi detached housing reveal gardens sprawling with camps and dormitories. The inner city has become about ownership, about property investment, even decrepit flats in once notorious housing estates have been sold off to the private rental market. The suburbs have become the temporary homes of migrant workers, of the low paid, of the work force in the service and construction sectors who, in their high visibilty vests have become largely invisible.

What happens when you're forced to spend hours immersed in stultifying work? What happens when you're working split shifts at a Mcdonalds in the middle of a traffic island near Heathrow airport, when you're living in a travelodge in Sunbury working on the construction of some luxury development, or stuck in a call cetre in Croydon hassling people all day about loan repayments. Some seek solace in marginal political ideologies, the EDL, Al Muhajiroun, the comfort and camaraderie of faith with the thrill of violence to puncture the boredom.

But mostly you self medicate. The suburbs are hallucinating, England is hallucinating. Monster Ripper and Smirnoff, Brandy Boost, oversized glasses of chardonnay at Weterspoons monday club, valium scored for a few quid in the pub , the stink of weed drifting from portakabins , red eyes and yellow bibs.. The pharmecuticals indiustry is one of UK Plc's biggest success stories ( along with arms dealing and loans companies) as prescriptions for anti depressants are kept on repeat.

We're all hallucinating, in a landscape that has become more surreal and more authoritaruan in equal measure. The physical landscape has become infantilised, we are spoken to in baby voices by cereal packets and drinks cartons and are subjected to the ubiquitous sight of cartoon characters looming down from billboards offering us energy tariffs and payday loans. And yet life in this country has never seened more coercive. More consumer choices than ever before, 'have it your way', but always within the narrowest set of parameters,,the moment you step out of line and express your anger the weight of the law comes crashing down,four years for nicking a bottle of water, the 2011 riots loom large in the suburban pysche.

In 2011 it was the suburbs that saw the most dramatic dispalys of collective violence. Croydon, Edmonton, Catford, Streatham, these towns, these suburban sites have become thr repositories of a class anger that for most of the time stays pent up in the cellular strucutres of housing estates. In rooms where you sit drinking supermarket lager in front of flat screen tvs, smoking weed playing x box, anger and frustration is sucked inwards..it is sublimated in a cascade of pahamecuticals and self help platitudes. Fluoxetine, citraloporan, CBT, it's all about fixing the individual. To be happy in the face of this disaster neoliberalism has wrought would surely be the pathological response?

In 2011 the barriers broke down, the estates and streets of the suburbs, instead of being selaed corridors suddenly becmae porous, terrirtorial markers melted, the streets became the site of collective engagement with the spectacle of consumerism. The anger was directed towards pawnbrokers, retail parks and high street stores , places taunting us every day.

In the new suburban enclaves, in the zones of sacrifice, there resides a surplus work force moving in a precarious fashion between flats in condemned buildings and camps under mortoway flyovers and patches of waste ground. There are buried currents, plots and cells.

The suburbs, once the site of order and domesticity are unravelling.

Savage Messiah is available to buy from the Verso website with 40% off. Visit here to order.