Libertarian municipalism under siege in Kobani 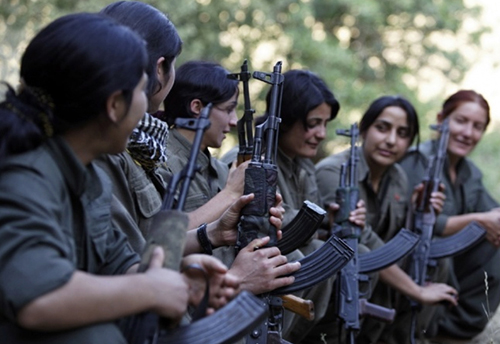 Despite beginnings as a Kurdish nationalist project, the goals of Kurdish revolutionary parties (the PKK and PYD) have turned toward models for direct democracy, apparently inspired by Murray Bookchin’s ‘Communalist’ ideology— a socialism that is anti-hierarchical, egalitarian and ecological.

While in prison, PKK founder and leader Abdullah Öcalan, became an unlikely devotee of Bookchin's libertarian municipalism. As a consequence, the Kurdish region of Rojava (Kurdish for West, implying Western Kurdistan) has been organizing with models for democratic self administration.

The town of Kobani (or Ayn al-Arab in Arabic) has been the site of radical experiments in self-governance—including the creation of local councils and assemblies, defended by popular militias such as the YPJ women soldiers (echoing the armed Mujeres Libres who fought the fascists during the Spanish Civil War, or more recently the women's battalions in Ukraine protecting their town against aggressions from Kiev).

Waves of international protest erupted in solidarity with the Kurdish community in Rojava (which have left at least 30 people dead in Turkey), as more than a hundred thousand Kurdish Syrans were displaced. Last week in The Guardian, David Graeber called attention to the plight of the Kurdish community, highlighting their radical attempt at self-governance.

“The PKK has declared that it no longer even seeks to create a Kurdish state. Instead, inspired in part by the vision of social ecologist and anarchist Murray Bookchin, it has adopted the vision of “libertarian municipalism”, calling for Kurds to create free, self-governing communities, based on principles of direct democracy, that would then come together across national borders – that it is hoped would over time become increasingly meaningless. In this way, they proposed, the Kurdish struggle could become a model for a worldwide movement towards genuine democracy, co-operative economy, and the gradual dissolution of the bureaucratic nation-state.”

To read Greaber's article in The Guardian in full, click here.

For more on Bookchin’s political ideas and strategies for popular assembly, please see our forthcoming publication of his essays, The Next Revolution: Popular Assemblies and the Promise of Direct Democracy.