In a pop-tastic twitter and facebook competition starting tomorrow, Friday 31st October, you can win copies of the beautiful books Radio Benjamin and Walter Benjamin's Archive. Read on to find out how to enter!
It's widely known that German philosopher and literary critic Walter Benjamin had a lifelong fascination with pop-cultural phenomena and the detritus of history, often associated with his interest in technology. From the films of Charlie Chaplin and Mickey Mouse to his escapades on Hashish around Marseille, modern experience gives mass culture an increasing power over more “high” cultural phenomena, complicating notions of authenticity and value. As Alex Ross states in a recent New Yorker article, Benjamin's work, and those of his intellectual and cultural heirs, shows that "messages of dissent can emanate from the heart of the culture industry." It’s not surprising, then, that his work has been acknowledged by pop icons (Laurie Anderson etc), novelists and composers (Walter Benjamin at the Dairy Queen, Shadowtime) as an influence in their work. Modern pop music would have almost certainly fascinated Benjamin as the site of contradictions and dreams. 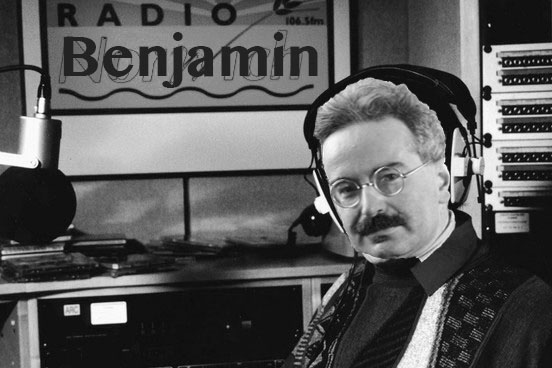 It therefore seems fitting that Benjamin worked so closely with the developing technology of radio, with its central role as the disseminator of pop music. Between 1927 and 1933, Benjamin wrote and presented between 80 and 90 radio broadcasts on Radio Berlin and Radio Frankfurt, all the extant manuscripts of which are published in English for the first time in our new collection, Radio Benjamin.

With this in mind we want you to tell us the kind of music you think Benjamin would be playing if he was presenting radio shows today on “Radio Benjamin”? In particular, we’re after your favourite example of “theory pop,” or music that references or takes influence from thinkers, or which shows the cross-pollination of high and low culture.  We’ll also accept examples of puns and wordplay – such as ‘One Direction Street’ and the like!

Here's an example of some #theorypop:
TWITTER: Send in your entry by tweeting @versobooks using the hashtags #radiobenjamin AND #theorypop

The competition will be running for ONE DAY ONLY from 10.00 GMT/ 05.00 EST on Friday 31st October to 22.00 GMT/ 17.00 EST. The competition is open to readers anywhere in the world as long as you have a working shipping address.