The true nature of internationalism 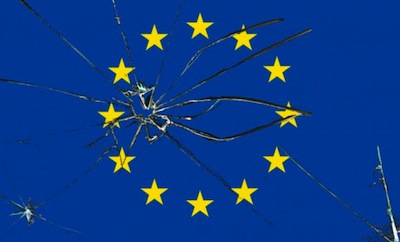 The European question catches the Left like a rabbit in the headlights because of its incapacity to admit that there is an internationalism of capital, an internationalism of the ruling classes. Internationalism is not always left-wing or progressive. On the contrary, the ruling classes are not forever trapped within the political form of the nation state. Capitalism is, by its very essence, a mobile system. When circumstances become unfavourable for the accumulation of capital, it can seek more propitious conditions elsewhere. Capitalism can also set one space in competition with another, relying on some of them in order to force the others to bend to its logic. Neoliberal globalisation simultaneously allows the opening up of new profitable fields of activity and acts as a powerful lever for the destruction of the expensive social concessions made after World War II.

To reorganise the accumulation of capital on a terrain in which trade unions and social movements are almost non-existent is the best way of weakening their position. The EU is an incarnation of this internationalism of capital. It is a political space from which the popular classes are excluded. In the past there were shades of disagreement among the European elites concerning the type of economic dynamic and political regime that ought to be developed. After the re-launching of the European project with the 1986 Single European Act, neoliberalism has enjoyed undivided dominance. Since its origins the tendency of the EU has been to escape any popular control. This tendency has never stopped growing, more than ever since the 2008 crisis. The least democratic European institutions, first among them the European Central Bank, have grown in power, to the detriment of those that still make a show of being democratic, like the European Parliament. The euro is at the heart of this capitalist-class internationalism: a real bulldozer for ‘wage discipline’ at the domestic level, it has been constructed as a means of payment and reserve currency at the world level, in service of the expansion of finance and big European corporations. The political set-up is no longer that of bourgeois domination by way of nation-states. Just like its opposite, nationalism, internationalism has never ceased changing in form.

Globalisation and the construction of Europe have thus changed the context in which the question of internationalism is posed. The political set-up is no longer that of bourgeois rule by way of nation-states. Just like its opposite – nationalism – internationalism has never stopped changing in form. Social movements – the workers’ movement first among them – have themselves tried to articulate the different levels of politics. The idea that internationalism consists of always opposing the international to the national is, therefore, simplistic. Internationalism consists of advancing the interests of the subaltern classes – and through this intermediary, the whole of humanity – by casting aside the obstacles erected by the ruling classes, regardless of the level at which these obstacles are situated. As we approach the European elections, the radical Left must recognise that no political alternative to neoliberalism is possible within the current institutional framework of the EU. The possibility of such an alternative presupposes a break with this framework, and taking back the means for implementing an autonomous monetary policy. This would, certainly, lead to disharmony within the EU; to put it another way, one or several countries would leave this framework, while others would want to keep it. The countries that left would go back to decision-making on the nation-state level, and, in the best-case scenario, would together decide alternative policies in order to organise a different type of integration. If it is not prepared for such an eventuality, then the radical Left will be left unequipped if and when it comes to power. It is inconceivable that the euro would remain in place across the course of this process. The countries that quit the European framework would be able to determine their own monetary policy.

Far from being an anecdote to nationalism, the EU has ceaselessly strengthened it. The resurgence of the very thing that European construction was meant to ward off is due to the combination of increasingly aggressive neoliberal policies and the growing sense of political dispossession that citizens feel in the face of Europe. The semi-colonial regime imposed on certain countries on the European periphery, first and foremost Greece, is no accident, but the expression of these fundamental tendencies. The external echoes of this regime are an odious immigration policy – ‘Fortress Europe’ – and a foreign policy that is either non-existent or enslaved to the interests of the United States. Europe is neither a coherent unit on the economic level (as the crisis has demonstrated) nor – still less – a culturally homogeneous space. The only reason to engage with Europe is to give it a political project improving the live of its populations. Yet in reality such a project has no reason to stop at the geographical borders of Europe. The countries situated beyond these frontiers could participate, while other countries situated on the continent might oppose themselves to it. To break with Europe to emerge from the neoliberal nightmare: this, perhaps, is the real internationalism.