Murray Bookchin "was a true son of the Enlightenment" - Ursula K. Le Guin reflects on 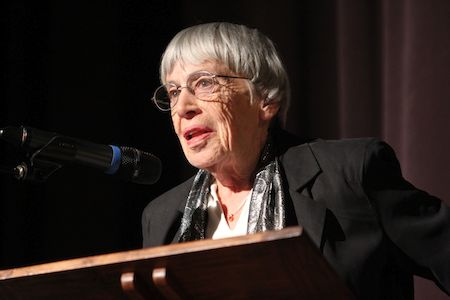 Le Guin observes that whilst the simplistic opposition between the ‘left’ and the ‘right’ has been a useful political descriptor and “reminder of dynamic balance” for the last two centuries, and despite the fact that we continue to use this oppositional language, she asks the question, “what is left of the Left [in the twenty-first century]? The failure of state communism, the quiet entrenchment of a degree of socialism in democratic governments, and the relentless rightward movement of politics driven by corporate capitalism have made much progressive thinking seem antiquated, or redundant, or illusory. The Left is marginalized in its thought, fragmented in its goals, unconfident of its ability to unite. In America particularly, the drift to the right has been so strong that mere liberalism is now the terrorist bogey that anarchism or socialism used to be, and reactionaries are called “moderates.”

Yet, Le Guin argues, young people continue to look for “intelligent, realistic, long-term thinking: not another ranting ideology, but a practical working hypothesis, a methodology of how to regain control of where we’re going.” She notes that Bookchin does indeed address this question of “where we’re going”:

“Impatient, idealistic readers may find him uncomfortably tough-minded. He’s unwilling to leap over reality to dreams of happy endings, unsympathetic to mere transgression pretending to be political action: “A ‘politics’ of disorder or ‘creative chaos,’ or a naïve practice of ‘taking over the streets’ (usually little more than a street festival), regresses participants to the behavior of a juvenile herd.” That applies more to the Summer of Love, certainly, than to the Occupy movement, yet it is a permanently cogent warning.”

Le Guin turns this warning towards the subject of ecological degradation:

“What all political and social thinking has finally been forced to face is, of course, the irreversible degradation of the environment by unrestrained industrial capitalism: the enormous fact of which science has been trying for fifty years to convince us, while technology provided us ever greater distractions from it. Every benefit industrialism and capitalism have brought us, every wonderful advance in knowledge and health and communication and comfort, casts the same fatal shadow. All we have, we have taken from the earth; and, taking with ever-increasing speed and greed, we now return little but what is sterile or poisoned.

Yet we can’t stop the process. A capitalist economy, by definition, lives by growth; as Bookchin observes: 'For capitalism to desist from its mindless expansion would be for it to commit social suicide.' We have, essentially, chosen cancer as the model of our social system. On page 91, Bookchin explains:

Capitalism’s grow-or-die imperative stands radically at odds with ecology’s imperative of interdependence and limit. The two imperatives can no longer coexist with each other; nor can any society founded on the myth that they can be reconciled hope to survive. Either we will establish an ecological society or society will go under for everyone, irrespective of his or her status.

Murray Bookchin spent a lifetime opposing the rapacious ethos of grow-or-die capitalism. The nine essays in The Next Revolution represent the culmination of that labor: the theoretical underpinning for an egalitarian and directly democratic ecological society, with a practical approach for how to build it. He critiques the failures of past movements for social change, resurrects the promise of direct democracy and, in the last essay in the book, sketches his hope of how we might turn the environmental crisis into a moment of true choice—a chance to transcend the paralyzing hierarchies of gender, race, class, nation, a chance to find a radical cure for the radical evil of our social system.

Reading it, I was moved and grateful, as I have so often been in reading Murray Bookchin. He was a true son of the Enlightenment in his respect for clear thought and moral responsibility and in his honest, uncompromising search for a realistic hope.”

Buy Murray Bookchin’s The Next Revolution with 40% off and bundled ebook here.