As talks in Brussels over Greece's bailout programme break down, Stathis Kouvelakis comments on the vast disparity between the position of Eurozone finance ministers and the demands of the popular movement behind Syriza. Furthermore, he provides context to ongoing pressures within the party itself. 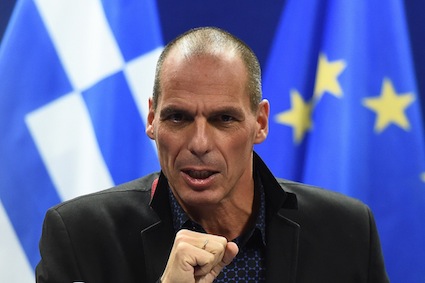 As the media and the Athens stock market (down 4 percent yesterday) had widely expected, yesterday’s finance ministers’ meeting ended in failure, perhaps even a momentous one. The tone of the Greek government’s official communiqué, which the whole media were quick to pick up on, was very tough indeed: ‘Certain circles’ insistence that the new Greek government implement the Memorandum is absurd and unreasonable. The implementation of the Memorandum programme was not on the table at the summit, and those who try to put it back there are wasting their time’.

Such language is entirely out of the norm for this type of context. But we have to say, even before the beginning of the meeting. Wolfgang Schäuble, the German finance minister, had been particularly insulting in his remarks, even by his own standards, declaring that ‘he felt sorry for the Greeks because their government is behaving irresponsibly’. He made barely veiled threats that Greece would be expelled from the Eurozone if it did not fulfil ‘the minimum of the claims’ and accused the government of acting ‘as if it was playing a high stakes hand of poker’. We did not have to wait long for the response from the Greek government’s spokesperson Gabriel Sakellaridis: ‘for my part, I can also say that I find the German government’s attitude irresponsible’.

It seems that during the discussions the European finance commissioner Pierre Moscovici and the IMF managing director Christine Lagarde accepted a version of the joint communiqué that made no reference to continuing with the present Memorandum programme and agreed to Greece’s proposal for a four-month intermediate programme guaranteeing European financing of its debt repayments, in exchange for it committing to ‘refrain … from unilateral actions’.[1] But this compromise text came up against German opposition, and the Eurogroup president Jeroen Dijsselbloem hurried to withdraw it and put forward another plan which, as Paul Krugman underlines, the Greeks could never have accepted.

Faced with the Greek government’s flat refusal to give in to diktats, Jeroen Dijsselbloem – this time accompanied by Pierre Moscovici – went on to the offensive and gave Greece until Friday to request ‘an extension of the existing programme’. He insisted that the current framework cannot be changed unilaterally and demanded that Greece commit to guaranteeing the loan repayments. Moscovici, for his part, stated that ‘there is no alternative to requesting an extension of the [existing] programme. We have to be reasonable, and not ideological’. Lagarde, speaking for the IMF, declared that there could be no new supply of credit without the Troika first evaluating it.

Paul Krugman commented on the Eurogroup’s brutal blackmail in the following terms: 'There was absolutely no way Tsipras and company could sign on to such a statement, which makes you wonder what the Eurogroup ministers think they’re doing. I guess it’s possible that they’re just fools — that they don’t understand that Greece 2015 is not Ireland 2010, and that this kind of bullying won’t work. Alternatively, and I guess more likely, they’ve decided to push Greece over the edge. Rather than give any ground, they prefer to see Greece forced into default and probably out of the euro, with the presumed economic wreckage as an object lesson to anyone else thinking of asking for relief. That is, they’re setting out to impose the economic equivalent of the “Carthaginian peace” France sought to impose on Germany after World War I”.’

With its very firm statements the Greek government has effectively rejected the ultimatum: ‘across the whole of European history, the democracies have rejected ultimatums. They do not sink to blackmail, and nor do they give in to blackmail’. Let’s not forget that the Syriza government has been backed up against the wall by the ECB’s decision to shut off the main tap providing funding to the Greek banks. But the popular support for the government, abroad as well as within Greece, has reached unprecedented levels – as we saw with Sunday’s demonstrations and mass rallies throughout the country as well as dozens of cities across Europe. Surveys in recent days have suggested that over 70 percent of the Greek population support the government taking a confrontational approach toward the Troika, including a very large majority of KKE [the Greek Communist party] voters as well as almost half of the New Democracy conservative electorate.

At the level of domestic politics, the significant opposition within Syriza to the party making current European commissioner Dimitris Avramopoulos its nominee for President of the Republic (as seems probable – Avramopoulos being a figure from the ‘centrist’/’moderate’ wing of New Democracy and a former minister in many right-wing governments) has led to this decision being put off till tomorrow evening, in the wake of this evening’s meeting of the party’s parliamentary group. Sunday’s meeting of the Syriza political secretariat showed that such a proposal – which Alexis Tsipras was meant to announce last night – would meet with strong opposition, far beyond the ranks of the Left Platform alone. Yesterday, at an emergency meeting of the parliamentary group, Tsipras proposed Prokopis Pavlopoulos, another figure of the “centrist” wing of New Democracy, who is expected to be elected by the Parliament this evening. Panagiotis Lafazanis, the leader of Syriza’s Left Platform expressed publicly his disagreement with that decision but also said that he couldn’t vote against the decision of the prime minister.

So it seems that, faced with rising pressure and increased EU blackmail, the Syriza government has no alternative but to hold firm. In taking this road, it will enjoy the active support of its own people, but also that of a growing section of European public opinion, which is becoming conscious of the stakes of this confrontation for the future of the entire continent.

[1] As Paul Mason revealed with a series of leaked documents.