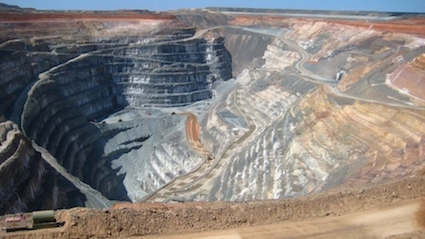 An unavoidable topic for thinking about the future in the twenty-first century has to be the question of the Anthropocene. Any kind of critical social thought really has to come to terms with the fact that 'nature' is no longer an external or constant given. When the geologists, of all people, start saying that signs of human meddling are showing up even in the rocks, then its time to pay attention. That is why, in Molecular Red (due out this April with Verso) I subtitled the book 'Theory for the Anthropocene'. But not everyone is happy with the term Anthropocene and some of its implications. In my view this is partly a real issue and partly a distraction. In the extract adapted from Molecular Red below I try to briefly map out this problem.

Notes on the Anthropocene

Disparate times call for disparate methods. Let’s just say that this is the end of pre-history, this moment when planetary constraints start really coming to bear on the ever-expanding universe of the commodification of everything. This is the worldview-changing realization that some now call the Anthropocene. Let’s not despair. Some of the greatest accelerations in the life of our species-being have happened in moments of limit, if never before on such a scale.

The Anthropocene is the name Paul Crutzen and others give to this period of geological time upon which the planet has entered. Crutzen: “About 30-50% of the planet’s land surface is exploited by humans…. More than half of all accessible fresh water is used by mankind. Fisheries remove more than 25% of the primary production un upwelling ocean regions… Energy use has grown 16-fold during the twentieth century… More nitrogen fertilizer is applied in agriculture than is fixed naturally in all terrestrial ecosystems.”

It’s not the end of the world, but it is the end of pre-history. It is time to announce in the marketplace of social media that the God who still hid in the worldview of an ecology that was self-correcting, self-balancing and self-healing – is dead. “The Anthropocene represents a new phase in the history of the Earth, when natural forces and human forces became intertwined, so that the fate of one determines the fate of the other. Geologically, this is a remarkable episode in the history of the planet.” The human is no longer that figure in the foreground which pursues its self-interest against the background of a wholistic, organicist cycle that the human might perturb but with which it can be in balance and harmony, in the end, by simply  withdrawing from certain excesses.

It is time to leave the twenty-first century. The metabolic rift that wakes from the carbon liberation front is not the only challenge to the biosphere. It is more enveloping than the comrades at the Trade Union Environment Centre could imagine. The term Anthropocene, as taken up by Paul Crutzen and others in the earth sciences, splices two roots together, anthropos and kainos. Anthropos: that with the face of ‘man,’ that which looks up. Kainos: that which is not just a new unit of time but a new quality or form. What would this mean to Bogdanov? He would refuse the authoritarian causality lurking in anthropos, that residue of the sky-God, and insist instead on making it mean collective labor. The kainos of labor in the twenty-first century is labor as intra-action, entanglement, the tragedy of the totality.

As someone who does texts rather than things, I am tempted to reject the term Anthropocene. Naming things ought to be the prerogative of us professional wordsmiths. Why accept a name some scientists came up with? And can’t we have a more aspirational name? I want a name for what ought to be the kainos, not what is. And in any case, it’s too anthropocentric. All of the interesting and useful movements in the humanities since the late twentieth century have critiqued and dissented from the theologies of the human.

But then I wonder what the comrades I knew in my youth at the Trade Union Environment Centre might have thought of it. Most of them were technical workers. They had a bit of that idealism that engineering was about making a better world through applying physics to materials, tools to tasks. They were struggling for a sense of a good technology. I imagine that for them the Anthropocene would have been something of a shock, in that it introduces the effects of labor into the situation in advance. What labor confronts is not just nature pristine, but nature always and already worked-over by labor.

The anthropos in Anthropocene might do unexpected work for those trained in the sciences or technical fields. Perhaps it is kainos that could be usefully confusing for humanists, social scientists, or for those few of us who remain who were trained at party school. What might it mean to think the qualitatively new, but where what is new is not defined by the communist horzion? It is striking how much even the anti-communists of the cold war era took the model of a new kainos, against which any other had to be thought, to be ‘communism.’ Their neo-liberal successors too.

This kainos, whether thought in, against or after the communist horizon, is usually thought as a new social relation. To the extent that it is thought as a relation to nature, it is as a victory that made struggles in and against nature obsolete. The Anthropocene, by contrast, calls for thinking something that is not even defeat. Nonhuman kainos is then as provocative a thing to think for those whose training is all about organizing the human as anthropos is for those whose training is in organizing the nonhuman.

Or such might be a way to make the most of something Alexander Bogdanov would surely have appreciated: that new experiences often have to be thought within the basic metaphors that already exist. Anthropocene it is, then. For now. A bad name for a bad time, thus not unfit. Donna Haraway: “We need another figure, a thousand names of something else, to erupt out of the Anthropocene into another, big enough story.” It’s a task not just of naming, but of doing, of making new kinds of labor for a new kind of nature.

There is still some low theory work to do, to transmit the metaphor of the Anthropocene between domains, but in that process, those labor processes will change it. Rather than ‘interrogate’ Crutzen’s Anthropocene – and where did that metaphor come from? – perhaps it is better to see it as what it is: a brilliant hack. The Anthropocene introduces the labor point of view – in the broadest possible sense – into geology. Perhaps the challenge is then to find analogous but different ways to hack other specialized domains of knowledge, to orient them to the situation and the tasks at hand.

Let’s invent new metaphors! Personally, I like the #misanthropocene, but don’t expect it to catch on. Jason Moore thinks we could call this the Capitalocene. Donna Haraway offers to name it the Chthulucene, a more chthonic version of Cthulhu, the octopoid monster of H.P. Lovecraft’s weird stories. “Chthulucene does not close in on itself; it does not round off; its contact zones are ubiquitous and continuously spin out loopy tendrils.”

Haraway notes the strikingly parallel evolution of new metaphorical tools in both humanities and biologies, where competitive individualism is no longer a given. In Bogdanovite terms, perhaps it is because in both domains, producing knowledge got strangely complex, collaborative, and mediated by apparatus. A new breed of basic metaphor is at least partly at work and in play, one which in the biologies could be described as a “multi-species becoming-with.”

Haraway wants to both “justify and trouble” the language of the Anthropocene. As Edwards does with climate science, she insists on the embeddedness in an infrastructure that makes the global appear as a work-object to those natural scientists for whom the Anthropocene makes sense as a metaphor. She points to the limits of its basic metaphors, which still think one-sidely of competition between populations or genes, where success equals reproduction. More symbiotic – dare we say comradely? – kinds of life hardly figure in such metaphors. But perhaps, as Haraway says, “we are all lichens now” – cyborg lichens.

The task is not debating names or trading stories, but making comradely alliances. Is not Crutzen one of those curious scientist-intellectuals that Robinson’s fiction trains us to look out for? Crutzen and his colleagues in the earth sciences have flagged something that needs to shape the agenda for knowledge, culture and organization. For those of us seeking to respond from the left, I think the authors presented in Molecular Red offer some of the best ways of processing that information. Alexander Bogdanov and Andrey Platonov would not really be surprised by the Anthropocene. They were already vulgar enough to think aspects of it already.