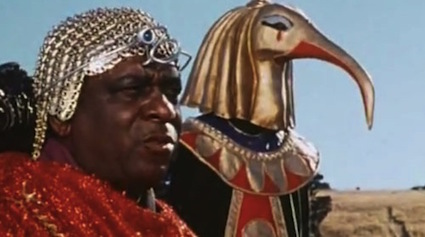 A conversation about radical or progressive futures in the twenty-first century clearly has to be a diverse and global one. Much more so than someone with my limited experience of the world could possibly manage. At least one component of it would have to be that current sometimes labeled Afrofuturism – even if some of the more interesting people making art or writing in such a space might adjure the label.

The term was put in circulation by my friend Mark Dery. But it might name a whole, vast current that arises out of the transnational experience of what Paul Gilroy called the Black Atlantic. Sun Ra might be an exemplary and well-known instance. His Afrofuturism was marked by a double refusal. Firstly, like many in the Afrocentric tradition, he did not identify with the Israelites, but with the Egyptians. He wanted to appear not from the position of the slave, but from a position of power. But secondly, he was much less interested in earthly roots than planetary trajectories. His Africans were from, and belonged in – space.

Perhaps my favorite example of Afrofuturism is Kodwo Eshun’s magnificent book More Brilliant that the Sun (1999). It is sadly out of print – and going second hand for over ninety American dollars – but fortunately it can also be found fairly easily in digital form.

For me, Eshun is a crucial piece of the current now known as Accelerationism. He traced a line through Sun Ra, the Detroit Techno of Underground Resistance and beyond, based on a writing practice he called “speculative acceleration.”