Alongside the comments made by Costas Lapavitsas and Stathis Kouvelakis on the Greek government's "capitulation" in the Eurogroup negotiations, Étienne Balibar and Sandro Mezzadra argue for a different approach to the present moment. 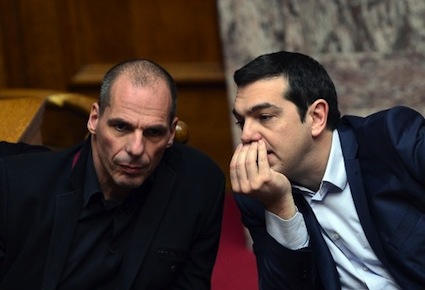 So is it true, as many of the papers tell us, that Athens has given in to the Eurogroup’s demands (as La Repubblica puts it) or that it has take the first step toward returning to austerity policies (as the Guardian reports)? If we believe certain leaders of the left wing of Syriza, the new government’s courage didn’t last long, and the ‘capitulation’ has already begun…

It is a little bit early to pass judgement on the agreements made at the Eurogroup meeting. Only in the next few days will the technical details be published, and only then will we be able to gauge their full political meaning.

However, in the meantime, here we are going to suggest a different way of analysing the confrontation between the Greek government and the European institutions – as expressed by Syriza’s compromises and the hints of division within these institutions. By what criteria should we measure Tsipras and Varoufakis’s actions, in order to judge how effective or appropriate they were?

Let’s say it again right away: the conflict opened up by Syriza coming to power has come at a moment of acute crisis in Europe. The wars spreading just outside the periphery of the EU, to its East as well as its South and South East, or the series of massacres of immigrants – drowned in the Mediterranean – suggest something like a decomposition of the European space. But there are also other aspects of the crisis, proliferating dramatically in just a few years of recession. More or less racist and neo-fascist political forces are on the rise from one end of the continent to the other. In these circumstances, Syriza’s electoral triumph and Podemos’s advance in Spain look like a unique opportunity to reinvent a left-wing politics fighting for equality and freedom, across Europe.

Nor should we forget that the background to these possibilities are the imposing mass struggles against austerity that have already been going for several years in Greece as well as in Spain. But at the same time that they spread ‘horizontally’, these struggles also crashed up against equally formidable ‘vertical’ limits: the banks’ and financial institutions’ domination of contemporary capitalism, and the new distribution of political power that has established itself thanks to the crisis. A few years ago we called it ‘a revolution from above’ [1]

These are the barriers Syriza has come up against, only just after it succeeded in establishing a ‘vertical’ axis of power allowing the rejection of austerity to resonate in Europe’s halls of office. Soon enough, it has had to deal with the regime that is currently in power in Europe and suffer all the violence of financial capitalism. It would be naïve to imagine that the Greek government could break down these barriers all by itself. Even a country with a much larger population and economy than Greece would not have been able to do so. Recent events have again demonstrated – if it was even necessary – that we will not be able to build a politics of freedom and Europe simply by asserting national sovereignty.

Yet the ‘barriers’ of which we have spoken now appear in a different light, as does the possibility of sweeping them aside. Struggles and protest movements did shine a light on how odious they are, but the rise of Podemos as well as Syriza’s triumph at the polls, followed by the actions of the Greek government, have begun to outline a strategy for overcoming them. We didn’t need telling that an electoral outcome alone would not be sufficient – in any case, Alexis Tsipras himself was clear enough on that point. Rather, we need a political process to open up, and, to that end, the affirmation and construction of a new relationship among Europe’s social forces.

Lenin once said something like the following: there are situations where we have to give up some space in order to buy ourselves some time. We could adapt this principle to last Friday’s ‘accords’: as always in politics, there is some unpredictability, here, but our bet is that the Greek government has ‘given something up’ in order to win both time and space. It has done so in order to allow the opportunity that has arisen in Europe to remain open, waiting until other possibilities ripen (not least with the Spanish elections), and until the agents of the new politics have managed to ‘conquer’ other spaces.

But for this process to develop, it must take to many different terrains in the coming months: this means social struggles and political initiatives; new everyday behaviours; a different state of mind among Europe’s populations; government action; and citizen counter-powers that assert their autonomy. So while we recognise the decisive importance of what Syriza has accomplished – and Podemos is planning to do – on the institutional terrain, we must also articulate the limits of this.

In an extraordinary article that recently appeared in the Guardian, the Greek finance minister Varoufakis showed that he is himself perfectly aware of this [2]. He tells us that, fundamentally, what governments can today do is seek to ‘save European capitalism from itself’ – save it from a tendency to self-destruction that threatens the peoples of Europe and opens the door to fascism. They can seek to push back the violence of austerity and crisis and open up spaces for conservation and cooperation, in which workers’ lives are a little less ‘solitary, poor, nasty, brutish and short’ (to use Hobbes’s words). No more than that, but no less either

So let us interpret what Varoufakis is saying. By definition, going beyond capitalism lies outside of any government’s field of possibilities, in Greece or anywhere else. That is something more than urgently rescuing European capitalism from a catastrophe that would also be our own – it is a perspective on the horizon of prolonged social and political struggles that cannot limit themselves to the institutional terrain.

But the collective force on which the advances of future months and years depend must be materially established also on the terrain of this other ‘continent’. So the terrain this force has to take to is – can only be – Europe itself, with a view to a constituent rupture with the current course of its history. Hence the importance of mobilisations like the one that the Blockupy movement has called for 18 March in Frankfurt, upon the inauguration of the new ECB headquarters. It is an opportunity to make the European people’s voice heard, supporting the actions of the Greek government. Beyond the – very necessary – denunciation of finance capital and the post-democratic regime (Habermas), it is also an opportunity to measure the advance of alternative forces, without whom the activity of the parties and governments fighting austerity will itself be condemned to powerlessness.


By Étienne Balibar and Sandro Mezzadra

The original piece was published in Libération 23 February.