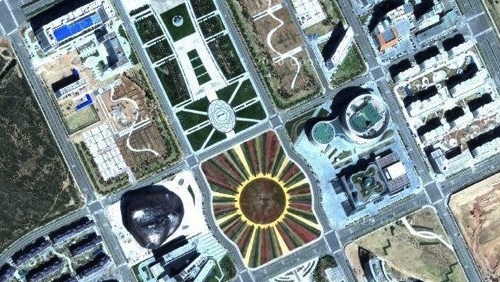 I am kind of fascinated by Chinese 'ghost cities'. Satellte images show whole towns with no cars on the road. The most famous, Ordos, even has an avant-garde art museum -- which is empty. (Its the blobby thing, bottom left) This report from a few years ago claims there are 64 million vacant homes in China.

Anyone who lives in a city has experiened buildings that remain empty, or even subdivisions that fail and remain vacant. After the 2008 crash America was littered with them. But the ghost city takes the whole phenomena up a notch. Whole cities are now constructed frm scratch in our lifetimes. When I was in China in 1987, Shenzhen was a fishing village; now it is a city of over 10 million people. Not surprisingly, if planning now has to happen at the scale and speed, there will be mistakes -- now of gigantic proportions.

The world is now majority-urban. Mike Davis famously called his book on the global megalopolis Planet of Slums. Any project for the future has to be thought at a scale suitable for a planet of 7 billion people. The cities of the over-developed world, such as in Europe and America and Japan now seem a bit quaint, if not in scale then at least in the slow speed at which they accreted. Perhaps the new urban forms will come from elsewhere.

Justin McGuirk has a very interesting book on Radical Cities: Across Latin America in Search of a New Architecture. It makes a good counter-point to Davis in its -- qualified -- optimism. Habitable futures are going to take some radical re-design of the urban, and at a hitherto unimagined scale.
Tagged
FutureLater
Urbanism