Bogdanov for the win! 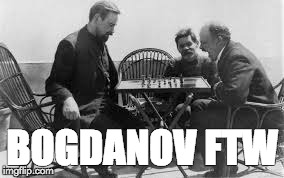 This is a famous picture of Lenin playing chess with Alexander Bogdanov while Gorky looks on. Bogdanov won. According to Gorky, Lenin was a bit of a sore loser about it. But then Lenin did manage to checkmate Bogdanov's influence in the Bolshevik faction and have him thrown out, so in the long run Lenin won everthing.

Bogdanov would be remembered in the Soviet Union mainly through Lenin's attacks on him, in Lenin's book Materialism and Empirio-Criticism. This version of the photo is one of those creepy ones in which several other people have been erased. Bogdanov's fate was in some ways even worse: officially designated as The One Who Had The Wrong Philosophy.

This sort of thing always makes me curious. Who was Bogdanov? What was his life and work all about? Not reading Russian, it was hard to find out. Not much is in translation, and still less is in print. His magnificent utopian novel, Red Star, is available from Indiana University Press, at least as an ebook. Fortunately there is now a resource page for rare, out of print material in English and French.

So why Bogdanov? Firstly, for his revival of the utopian imagination in the light of Marx. He understood the emotional power of a promised land, but unlike Gorky was not tempted by 'God Building'. He was more interested in opening the imaginative faculties to thinking about this world. His utopia, even though set on Mars, is practical.

Secondly, for Proletkult. Bogdanov initiated a mass movement in 1917 that tried to become a counter-power to the state, but whose mission was proletarian culture. How could the people learn to organize themselves and their world? How could the literary classics of the past, even Shakespeare, be a way of learning what organization is? Proletkult was about learning forms of self-organization that can exist outside of capital and the state.

Thirdly, his tektology. How can al organizational tasks, whether the organzing of labor's relation to nature, or the organizing of different kinds of labor with each other, share and develop knowledge? Bogdanov thought that after the revolution, the real organizational work was just starting, and that the real question was labor's relation to nature.

We don't have that luxury. We are going to have to figure out a new relation between labor and nature while capitalism -- or whatever this mode of production is -- still lumbers along, turning everything into the commodity. But I think Bogdanov is a useful guide to thinking and organizing otherwise. After all, as I show in Molecular Red, he almost figured out anthrogenic climate change.

Sometimes to take three steps forward, one needs to take two steps backward, back toward what for Paolo Virno is the potential of history, but sometimes too to return to particular resources for moving forwards. And so, back to Bogdanov -- for the win.
Tagged
FutureLater
Bogdanov
Molecular Red